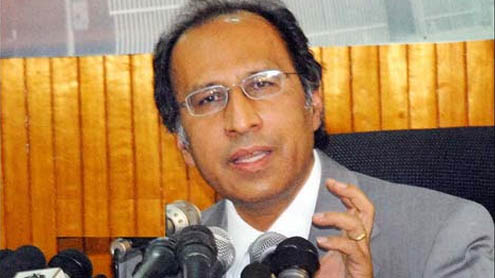 KARACHI: After his resignation from the post of the federal finance minister, Dr Abdul Hafeez Shaikh is likely to get the office of caretaker chief minister for Sind, Media has learnt reliably.

The Muttahida Qaumi Movement, which recently became the leading opposition in the Sind Assembly, has also given a go-ahead to its former ally – the ruling Pakistan People’s Party (PPP) – for Sheikh’s appointment as Sind chief minister in the caretaker setup, sources privy to the development told Pakistan Today.The federal finance minister resigned from his post on February 19, 2013, amid speculations that he might lead the caretaker government as prime minister.

However, it was also expected that the opposition leader might object to his appointment as prime minister in the interim government, as he was seen too close to the military and served as the privatisation and investment minister under former military dictator General (r) Pervez Musharraf. After Shaikh’s resignation, State Minister for Finance Saleem Mandiwalla was made the finance minister in his stead.The sources said that the MQM delegation, headed by Parliamentary Leader Sardar Ahmed, held a detailed discussion with Sind Chief Minister Qaim Ali Shah over Sheikh’s appointment as caretaker chief minister.

However, the final decision in this regard would be taken by the MQM’s Rabita Committee, sources disclosed.Interestingly, sources claimed that Hafeez Shaikh was among those candidates which had been forwarded by the MQM. “Shaikh has very good relations with the MQM too and it will benefit the ruling PPP to induct him as caretaker prime minister,” sources said.

Besides, Chief Minister Qaim Ali Shah will also contact other opposition parties for Sheikh’s induction as caretaker CM, sources said, adding that PPP leaders including Pir Mazharul Haq, Sharjeel Memon, Ayaz Soomro and Aga Siraj Durrani also met President Asif Zardari and apprised him about the development of making Hafeez Shaikh as caretaker chief minister.Sources claimed that the official announcement was expected to be made in the days to come after the consultation process with opposition parties was completed. When approached, the PPP and MQM leaderships gave clear hints however they did not confirm the news, saying that they were waiting for an appropriate time. – PT