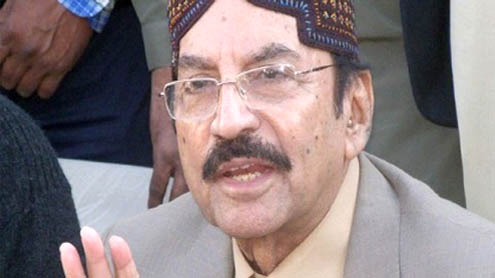 KARACHI: Chief Minister Sindh Syed Qaim Ali Shah has claimed that law and order situation in Karachi is under control.

He said that police force was not sufficient compared to the city population.Talking to media persons after condoling the death of MQM MPA Manzar Imam with his family on Sunday, Syed Qaim Ali Shah said that it was a difficult task for insufficient law enforcement personnel to make fool proof security arrangements for people of highly populated city with a population of about 20 million.

He assured that police force in the volatile areas would be increased, besides deploying additional security forces in Orangi Town and another police station would be established in the area.Earlier, the chief minister Sindh offered Fateha for the departed soul of Manzar Imam and presented Rs 2.5 million cheque to his brother.Later, Qaim Ali Shah also visited the house of former provincial minister for sports, Muhammad Ali Shah and condoled his death with the bereaved family. He termed the death of Dr Muhammad Ali Shah as a great national loss. – PT