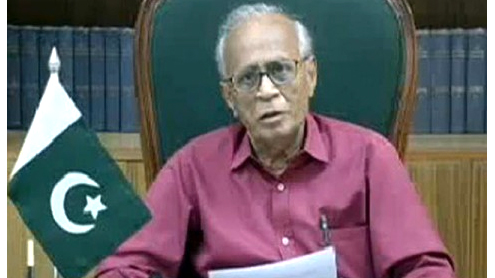 KARACHI: Backsliding on the exercise to redraw electoral constituencies in Karachi – a subject directly linked to ending political and ethnic polarization, as observed by the apex court on November 26 last year, and met with a legal challenge and criticism from MQM of Altaf Hussain – the Chief Election Commissioner stated on Tuesday there would be no fresh delimitation of constituencies in Karachi before the next general elections.

“I am not running away; I will do whatever necessary to hold elections,” Justice (retired) Fakhruddin G Ibrahim told reporters, adding that the matter was sub judice and that it was not an easy task either. The process of re-verifying electoral rolls in Karachi was a difficult task; however, the ECP staffers had been working in a transparent manner, he told the media following his visit to different areas in Karachi with regards to the verification of electoral rolls. The chief election commissioner, to a question, remarked that the commission did not need help of the army for the verification process, saying they did not face any law and order problem; the Karachi corps commander had assured of support (wherever necessary) though.

“Only transparent elections can bring improvements. Transparent and free elections warrant a better future, we have no future otherwise,” Ibrahim affirmed as he exhorted the citizens to get registered quickly because it was the duty of every Pakistani to cast vote. The election commissioner also said he wanted that elections be held timely. He promised that the Election Commission of Pakistan would closely work with the interim government to ensure that a new government was chosen in free and fair elections. He added that all the stakeholders were cooperating with the commission in this respect. In the wake of non-implementation of its order in a suo motu case relating to frequent target killings in Karachi, a Supreme Court bench had conducted a series of hearings in the city, and on November 28 the election commission was asked to initiate the process of delimitation in Karachi.

MQM, the only political party opposing the delimitation, filed a review petition in December against the observation, pleading that the court’s ruling was in violation of the Constitution. On January 9, the court admitted the plea for hearing. In its petition, the MQM pleaded that the delimitation could only be undertaken after a fresh census and pointed out that the Supreme Court should not have interfered with the ECP’s discretion by rejecting the October 24 statement of the commission that there could be no delimitation in Karachi without a fresh census.On November 26, the apex court observed that the constituencies in Karachi should be delimited in a manner that they comprise “mixed population” to avoid political polarisation. The exercise for verification of Karachi’s voters list began on November 29.

MQM leader Farooq Sattar said delimitation in Karachi must be undertaken strictly in accordance with law which, according to him, required a fresh census before any such exercise. The last census was held in 1998 and delimitation on its basis was carried out in 2002 and was upheld by the Election Commission and courts. On December 20, the Muttahida Qaumi Movement virtually isolated itself from other political parties when it opposed the delimitation of constituencies in Karachi at a meeting the Election Commission had convened. It was a consultative meeting presided over by Chief Election Commissioner Ibrahim. The parties were asked by the commission to make written comments on how to modify the existing boundaries with maps illustrating desired changes.

MQM’s Farooq Sattar said (the process of) delimitation without a fresh census was unconstitutional.  He described delimitation as beginning of gerrymandering against the MQM, claiming that the Election Commission of Pakistan had suddenly deviated from its position over the issue by agreeing to undertake the process. Until about a year back, the ECP had been saying that delimitation could not be done without a census, he recalled, and said the ECP should tell people what kind of expediency forced it to deviate from its position. – PT