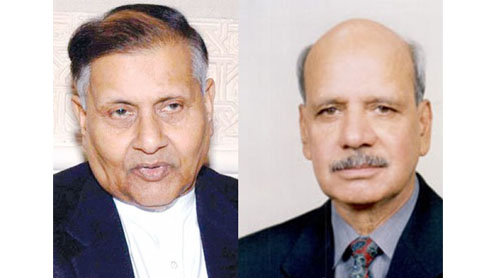 ISLAMABAD: The Supreme Court in a landmark judgment on Friday said it has been established that an election cell was set up to stop the PPP from winning the 1990 elections and directed the government to take action against all the civil and military characters involved in the rigging.

Only a day before, Brigadier Muhammad Amir Military Secretary to President Asif Ali Zardari, who is also co-chairman of the PPP (Pakistan Peoples Party), had informed the court that no record was found regarding the presence of a political cell at the President House since 1990.

The short verdict in Asghar Khan case, which has been lingering on for the last 16 years, is unprecedented in country’s history as it ordered legal proceedings against General (r) Aslam Beg, a former chief of the powerful Army, and General (r) Asad Durrani, a former head of  ISI (Inter-Services Intelligence).

The 7-page short order, authored by the chief justice himself, also said that any election cell or political cell in the presidency or ISI, or MI, or within their formations shall be abolished immediately and any letter or notification to the extent of creating any such cell or department (by any name whatsoever) shall stand cancelled forthwith.

The order said that former president, the late Ghulam Ishaq Khan, ex-COAS General (r) Aslam Beg and ex-DG ISI General (r) Asad Durrani acted in violation of the constitution by facilitating a group of politicians and political parties to ensure their success against the rival candidates in the general election of 1990, for which they secured funds from Mr Younas Habib.

The acts of Gen Beg and Gen Durrani have brought a bad name to Pakistan, its Armed Forces as well as the secret agencies, and it demeaned them in the eyes of the nation, the court said. It directed the federal government to take necessary steps against them under the constitution and law, though they have retired from the service. “Proceedings shall also be launched against them for affecting the recovery of sums received by them with profit thereon by initiating civil proceedings, according to law.”

The court also said that legal proceedings shall be initiated against the politicians, who allegedly have received donations to spend on election campaigns in the general election of 1990, therefore, transparent investigation on the criminal side shall be initiated by the FIA against all of them and if sufficient evidence is collected, they shall be sent up to face the trial, according to law. Younas Habib should also be dealt with in accordance with law.

The judgement said that Younas A Habib, the then Chief Executive of Habib Bank Ltd, on the direction and behest of Ghulam Ishaq Khan, Aslam Beg and Asad Durrani, arranged Rs140 million, belonging to public exchequer, out of which Rs60 millions were distributed among politicians, whose incomplete details have been furnished by Asad Durrani; however, without a thorough probe no adverse order can be passed against them in these proceedings.

An amount of Rs80 million, as stated, has been deposited in Account No. 313 titled Survey and Construction Group Karachi, maintained by MI; therefore, this amount with profit shall be transferred to Habib Bank Ltd, if the liability of HBL has not been adjusted so far; otherwise, the same may be deposited in the treasury account of Government of Pakistan, the verdict said.

The court said the citizens of Pakistan as a matter of right are free to elect their representatives in an election process being conducted honestly, justly, fairly and in accordance with the law. The President of Pakistan, Chief of Army Staff, ISI DG or their subordinates certainly are not supposed to create an election cell or to support a political party or group of political parties, because if they do so, the citizens would fail to elect their representatives in an honest, fair and free process of election, and their actions would negate the constitutional mandate on the subject.

The order said that the armed forces of Pakistan, under the directions of federal government, defend the country against external aggression or threat of war and, subject to law, are to act in aid of civilian power when called upon to do so under article 245 of the constitution. Therefore, any extra-constitutional act, calls for action in accordance with the constitution and the law against the officers/officials of the armed forces without any discrimination.

The armed forces have always sacrificed their lives for the country to defend any external or internal aggression for which they, as institutions, are deeply respected by the nation. The armed forces, in discharge of their functions, seek intelligence and support from ISI, MI, etc., and on account of security threats to the country on its frontiers or to control internal situations in aid of civil power when called upon to do so.

However, ISI, MI or any other agency like IB has no role to play in the political affairs of the country such as formation or destabilisation of government, or interference in the holding of honest, free and fair elections by the Election Commission of Pakistan (ECP). The involvement of the officers/members of secret agencies i.e. ISI, MI, IB, etc. in unlawful activities, individually or collectively calls for strict action as it is in violation of oath of their offices, and if involved, they are liable to be dealt with under the constitution and the law.

The court noted that the president, in a parliamentary system of government, being head of the state represents the unity of the republic under article 41 of the constitution. And as per the oath of his office in all circumstances, he (the president) will do right to all manner of people, according to law, without fear or favour, affection or ill-will. Thus, holder of office of President of Pakistan, violates the constitution, if he fails to treat all manner of people equally and without favouring any set, according to law, and as such, creates and provides an occasion which may lead to an action against him under the constitution and the law.

The general election held in the year 1990 was subjected to corruption and corrupt practices as in view of the overwhelming material produced by the parties during hearing it has been established that an “Election Cell” had been created in the Presidency, which was functioning to provide financial assistance to the favoured candidates, or a group of political parties to achieve desired result by polluting election process and to deprive the people of Pakistan from being represented by their chosen representatives.

Asghar Khan, the petitioner, called it a great judgment and his counsel Salman Akram Raja remarked that the short order had covered all the aspects, which were raised during the proceedings. He said that it was for the first time in the country’s history that a ruling had come against retired military officials. On the occasion, Salman Raja said that it would be impossible for the government to not act on the court’s verdict.