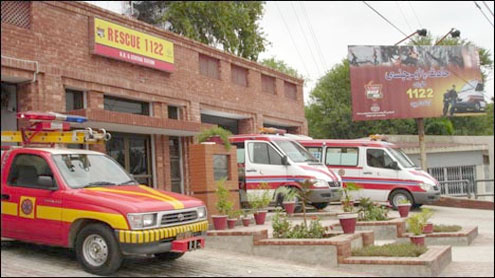 Home and Tribal Affairs Department said in a statement on Friday that the rescue facility was being extended to the remaining five divisional headquarters, including Kohat, Bannu, Swat, Dera Ismail Khan and Abbottabad.

Rescue service was introduced in Peshawar in Sept 2010 and then extended to Mardan in Oct 2011. The service was launched in the wake of growing acts of terrorism and natural disaster in the province. It has been extending ambulance, fire fighting, search and rescue operation services in these two districts with a total staff of 779 officials.

The statement said that the organisation would be equipped with necessary equipment and PC-I had been prepared in this regard. Planning and development department will send the scheme to provincial development working party for approval.The department said that after extension to divisional headquarters the service would be established at district level. The government has regularised staff of the Rescue 1122 after the provincial assembly passed the Khyber Pakhtunkhwa Emergency Rescue Service Ordinance, 2012 last week.

Under the law the organisation would maintain a state of preparedness to deal with emergencies and provide timely response, rescue and emergency medical facilities to the victims.Besides, the government would establish an academy that would be called Khyber Emergency Service Academy to arrange courses. – Dawn