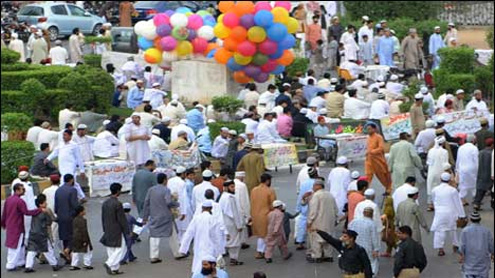 ISLAMABAD: Nation celebrated Eid-ul-Fitr with traditional zeal and religious fervour and reverence coupled with renewed pledge to forge unity in the entire Muslim Ummah and further strengthen the national cohesion and solidarity.

The day dawned with special Eid sermons where Ulema stressed for unity of Muslim Ummah and prayed for the prosperity and well being of the country. In Islamabad, the largest Eid Congregation was held at Faisal Mosque. In Karachi, the Eid namaz was offered at more than 1,000 places including the Eidgahs, mosques, Imambargahs, parks and open places in the city. The main Eid congregation was held here at the Old Polo Ground where the Sindh Governor, Dr. Ishartul Ebad Khan, offered Eid prayer alongwith notables, members of the diplomatic corps from the Islamic countries.

The Chairman of the Central Ruet-i-Hilal Committee, Mufti Munib-ur-Rehman, led the Eid prayer at the Markazi Eidgah `T’ Groundin federal B. Area. All important public and private buildings, including shopping centres, were decorated and illuminated. In Rawalpindi, main biggest Eid Congregation was held at Liaqat Bagh. Hundreds of thousands of believers thronged the mosques and Eidgahs to offer Eid prayers at over 700 places indifferent parts of the provincial metropolis in Punjab.

Eid-ul-Fitr was celebrated in major parts of Khyber Pakhtunkhwa including provincial capital Peshawar, all the seven tribal agencies and six frontier regions on Sunday. Meanwhile, strict security measures were adopted on the occasion of Eid to avert any untoward incident. -Geonews