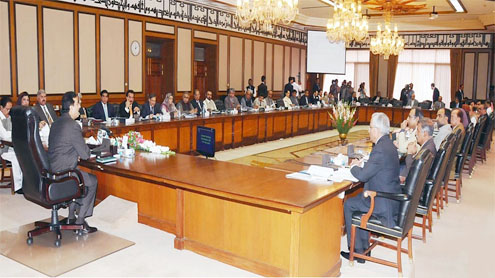 ISLAMABAD: Approving ‘strict action against electricity thieves’ and ‘electricity bill defaulters’, the federal cabinet has directed ministry of law and justice to draft its bill in this regard.

The Chairman cabinet committee briefed the participants about energy situation of Country, while it also evaluated a deep stock of divisional and investment boards of states and tribal areas; whence the cabinet was informed that 67% issues of tribal areas and states had been resolved, while the rest were being effectively pursued.The cabinet was also informed by chairman cabinet committee, that 84% of issue regarding investment board had also been resolved, while work was underway on remaining part of the issue.

Taking stock of 15 May recommendations of ECC (Economic Coordination Committee), the cabinet approved them, while also reviewing its 25th April 2012 decision regarding CDA 1960’s ordinance, during which cabinet had approved the proposed amendments (of this ordinance), stressing that such amendments should have been according to act of parliament, instead of an ordinance.The finance division also briefed the cabinet meeting regarding consumer prices, while the cabinet also approved accord for defense and technology cooperation between Pakistan and Libya, paving the way for a long-term, broad based defense related relationship between two countries.

One of the highlights of the occasion was cabinet’s approval of Pakistan’s membership in OTIF, the international railway carriages’ organization.Much earlier, during its 15th Dec 2010 meeting, the cabinet had approved in principle, this recommendation of Railways’ Ministry regarding Pakistan’s membership in OTIF, comprising of 43 nations of Europe, North Africa, Asia and Near East, among which Iran and Turkey feature prominently, while even a train service had also traversed over the route of Islamabad-Istanbul-Tehran- Islamabad in the connection.

A 4-member committee, chaired by Makhdoom Amin Fahim was also formed by the cabinet, to review the law and order situation of Karachi, while another committee was also formed by PM under the chair of Farooq. H. Naek to probe the issue of missing persons of Balochistan.Briefing the media after the Cabinet meeting, the federal information minister, Qamar-uz-Zaman Kaira stated that NATO leadership moot was rather a National concern, than that of PPP led government.He scoffed at Difah-e-Pakistan as an invisible (fake/psuedo) Army brigade, admonishing them to adhere to reality in wake of (what Kaira termed as) a robust advocacy of National interests, including sovereignty and integrity of Pakistan. – Onlinenews