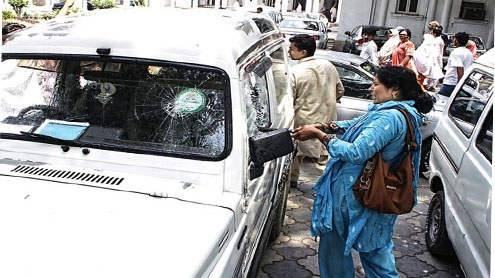 LAHORE May 16: Police used batons to disperse the employees of population welfare department at Civil Secretariat on Wednesday who were demanding regularisation of their service.

Two women employees were injured and their five male colleagues arrested on charges of ransacking the offices.Hundreds of employees from all parts of Punjab gathered at Nasser Bagh under the banner of All Pakistan Clerks Association. Holding banners and placards they marched on the secretariat.The protesters entered the secretariat and broke windowpanes of the chief secretary’s office. They wanted to see him for acceptance of their demands. Meanwhile, police resorted to baton charge and pushed the protesters out of the secretariat. Two women – Asma and Shamsa – suffered injuries and were shifted to hospital for treatment.

The police took Ahmed Khan Awan, Mozam Khan, Farooq Ahmed and two others into custody while the remaining protesters managed to ‘escape’.APCA Lahore Chapter President Ahmad Khan Awan told reporters that they had been demanding for the last two years that the population welfare department should not be merged with the health department. “The health department cannot meet the demand of its own employees. How can it manage another department with the same number of employees,” he said. He said the contract employees should be made regular without any further delay. He argued that all the employees on contract were over-aged and they could not get jobs in other departments now.

APCA Secretary-General Mozam Khan said: “The high court had declared population department as an independent entity in other three provinces but the Punjab government is still interested in merging it with the health department.”He said a bachelor’s degree holder at his department got Rs7,000 per month that was less than even a common worker with Rs9,000 salary.While taking to reporters Special Assistant to Chief Minister Rao Aneesur Rehman said the government would call the leaders of APCA for talks within a week.

suspended: Inspector General of Police Habibur Rehman has suspended Islampura circle DSP Muhammad Iqbal and SHO Muhammad Idrees from service on charges of negligence and dereliction of duty.According to a handout issued on Wednesday, the officials have been suspended after security laps were detected outside the Civil Secretariat.A police official concerned said the IG took the decision after the DSP and the SHO failed to stop protesting members of the All Pakistan Clerks Association from entering the secretariat from Gate No 1 after breaking police cordon. – Dawn