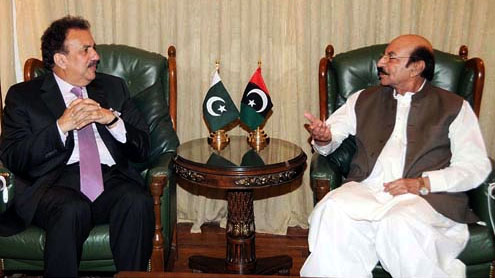 KARACHI: In a meeting held between Sindh Chief Minister Qaim Ali Shah and Interior Minister Rehman Malik on Sunday, it was decided that indiscriminate action will be taken against criminals to restore peace in Karachi.

During the meeting held to discuss the law and order situation, consensus was reached to work with all political parties to ensure peace in the city.The decisions taken also included the removal of political parties’ flags hoisted across the city and an increase in the number of checkposts in sensitive areas.The political parties have also been urged to expel workers who are involved in spreading violence.Speaking to media after the meeting, Malik said due to prior intelligence information, many terrorist activities were prevented from happening and situation was brought under control immediately.

Appreciating Sindh Police and chief Karachi police for restoring peace, the interior minister said the situation could have gotten worse if “we had no intelligence information.”Malik further said he himself visited the affected areas of the city along with the police personnel to determine the situation.“The seven sensitive areas of Karachi now have increased police presence; sharpshooters have been placed near flyovers and there will be frequent patrolling by the security officials,” Malik stated.

The interior minister also said that the SHOs will be held responsible for any mishap in their concerned areas.Commenting on removal of flags of different political parties, Malik said flags should be removed from government properties within 24 hours. “If flags are not removed within the given timeframe, the concerned SHOs will be responsible for doing so,” he added.President Asif Ali Zardari, who arrived in Karachi on Friday, has also summoned a meeting to discuss the matter.Karachi saw consecutive strikes called by Awami National Party (ANP) and Muttahida Qaumi Movement (MQM) one after the other after their workers got killed, sparking violence in the city. – Thetribune