Govt shows no mercy on people 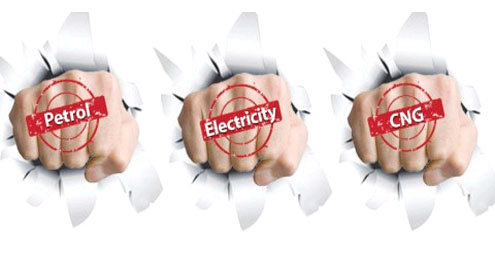 ISLAMABAD: Without showing any mercy to the already hard-pressed people, the government on Wednesday apathetically passed on the full impact of the rise in global oil prices to consumers by jacking up POL prices by Rs 2.75 to 8.67 per litre, power tariff by Rs 3.03 per unit and Compressed Natural Gas (CNG) prices by Rs 0.91 to 1.77 per kg with effect from March 1 (today).

The massive increase in power tariff due to fuel price adjustment and hike in POL and CNG prices would trigger unprecedented inflation and there are fears in the official circles that the masses may take to the streets, despite the government’s attempt to pre-empt any such situation by keeping on board its allies and opposition parties.According to a notification issued by the Oil and Gas Regulatory Authority (OGRA), the price of motor spirit (petrol) has been increased by Rs 2.75 per litre to Rs 97.66 per litre, High Octane Blended Component (HOBC) by Rs 8.67 to Rs 126.87 per litre, Light Diesel Oil (LDO) by Rs 3.08 to Rs 93.29 per litre and Kerosene Oil (KO) by Rs 4.38 to 96.40 per litre, while the price of High Speed Diesel (HSD) has been retained at Rs 103.46 per litre even though an increase of Rs 2.82 per litre was calculated.

OGRA had recommended to keep the prices unchanged by absorbing the impact through petroleum levy (PL), however, the government due to its budgetary constraints, decided only to retain the HSD price. The government also decreased the petroleum levy from Rs 6.50 to Rs 4.07 per litre, which will result in a subsidy of an estimated Rs 1.9 billion in March 2012.A crucial meeting of the National Assembly Special Committee on POL prices recommended freezing of HSD at the level of February 1, however, subsidy in the prices of other POL products would be decided after consulting the provinces.

The federal government wants the provinces to share the burden of the subsidy by agreeing to cut the provincial share in the revenue.Talking to reporters after the meeting, chairman of the committee Naveed Qamar said the Finance Ministry had agreed to provide a subsidy of Rs 7.5 billion on HSD for the remaining four months of the current fiscal year.He said that it was decided that prices of HSD would be kept unchanged, as it is the main fuel for transportation. About subsidising other POL products, he said the federal government would discuss sharing the burden of subsidy with the provinces, as the federal government could not bear the entire burden alone.

Another notification of OGRA increased the cess on CNG by 20 percent. CNG prices in Region-I comprising Khyber Pakhtunkhwa, Balochistan and Potohar – including Rawalpindi, Islamabad and Gujjar Khan – have been increased by Rs 1.77 to Rs 77.12 per kg.For Region-II, comprising Sindh and Punjab, the prices have been increased by Rs 0.90 to Rs 71.05 per kg.Only two days ago, the government imposed GST on gas cess at Rs 1.06 per for Region I and Rs 0.55 per kg in Region II.All Pakistan CNG Association condemned the increase in gas cess and imposition of GST on gas cess.

But this is not where the tale of price hike ends.A separate notification issued by the National Electric Power Regulatory Authority (NEPRA) on Wednesday allowed all distribution companies (DISCOs) the collection of Rs 3.03 per unit, a 39 percent increase, under fuel price adjustment for August 2011.It asked DISCOs to implement the decision keeping in view the orders of the high courts.

NEPRA Vice Chairman Shaukat Ali Kundi said in his dissenting note that the merit order of the power plants was not strictly observed as inefficient plants were operated while efficient plants were not being operated at full capacity.The scheduled maintenance was not carried out and worn out parts were not replaced in time by GENCOs and malpractices in procurement and pilferage also added to higher generation cost.

Noting that the NPCC and GENCOs miserably failed to improve the performance of their plants, Kundi recommended there was no justification to pass on the inefficiencies of GENCOs and NTDC to consumers. Hence, he had differed with the decision of the authority.The consumers will have to pay an additional Rs 195 on an electricity bill of Rs 500, Rs 390 on a bill of Rs 1,000, and Rs 3,900 on a bill of Rs 10,000.

However, under the interim decision of the high court, domestic consumers of the Lahore Electric Supply Company (LESCO) using up to 350 units per month will be exempted from the increase in the power tariff.The decision in increasing the power tariff will not be effective on life line consumers who consumer just 50 units a month and the decision would also not be implemented on the consumers of the Karachi Electric Supply Company. – PT

Reaction of industries over trade liberalisation with India

Reaction of industries over trade liberalisation with India