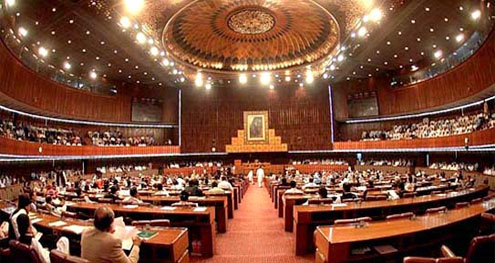 ISLAMABAD: Treasury and opposition benches on the first day of 39th National Assembly session staged a walkout against the latest hike in petroleum prices, terming it a extra burden on the masses, and demanded the government to either withdraw or slash it down.

The National Assembly also deferred the 20th Amendment Bill, as Begum Nasim Akhtar Chaudhry from the PPP presented the report of the standing committee on the proposed legislation.Before staging the walkout, PML-N Deputy Secretary-General Ahsan Iqbal came down hard on the federal government. He appealed the allied parties to join the protest for pressurising the PPP-led government to reverse the increase in the prices of POL products.

He, on point of order, termed it a manufactured crisis of the incumbent government. “PPP’s government is callously increasing the petroleum products prices, which is the main factor behind the price hike in the country,” he said, adding that the challenge of circular debt also remained unresolved.The PML-N leader also said that the non-transparent appointments on key posts were also resulting in wrong policies of the incumbent government, as he cited the selection of the PSO managing director to prove his point.

Other PML-N legislators, Rana Tanvir and Hanif Abbasi suggested that the government was not serious with the masses.MQM lawmaker Wasim Akhtar was also among the protesting speakers, as the party’s members left the house as an expression of disapproval.Besides criticising the raise in POL prices, Bushra Gohar of ANP also talked about the banned outfits, which are openly organising rallies in the country. “How these organisations are given permission to hold public meetings in Punjab,” she said, while asking the government to look into the matter of continuous threats to the Ahmadi community.

Sardar Muhammad Talib Nakai questioned how could the petroleum minister announced the increase in prices five days earlier.Earlier, while raising his concern on the killings in Balochistan, PPP MNA Usman Khan Advocate said a suo moto notice was taken on the recovery of two liquor bottles, whereas no action had so far been taken on the rising number of deaths in the province.Speaking on a point of order, MQM legislator Haider Abbas Rizvi claimed that there was some misappropriation in distribution of land in Diamir Bhasha Dam site, an issue which required proper attention.

In a response, Federal Minister Manzoor Wattoo said the process of compensation was being carried out transparently, on which PPP-S Chairman Aftab Sherpao said the people of Kohistan were not being compensated.Responding to the concerns raised by legislators from opposition and treasury benches, Interior Minister Rehman Malik condemned the assassination of Domki family in Karachi and said a high-level committee had been constituted on the directives of President Asif Zardari to investigate the matter. He invited the Bugti family to nominate their representatives for the inquiry committee.

He denied the reports that the directive to target the Domki family members was issued from a jail. He claimed that there were close links between Sipah-e-Sihaba and Balochistan Liberation Army (BLA) and claimed that the incidents of target killing had reduced after arrest of some of their activists.Responding to call-attention notice, Minister for Religious Affairs Khursheed Shah said the federal government was negotiating with Punjab on setting up a central Drugs Regulatory Authority (DRA) in the country.Earlier, journalists staged a token walkout from the press gallery to protest non-payment of salaries for the last four years. However, they ended the protest on the assurance of Minister for Information Firdous Ashiq Awan, who promised to discuss the issue with the owners of TV channels. – Nation