by Top
in Business, Pakistan
0 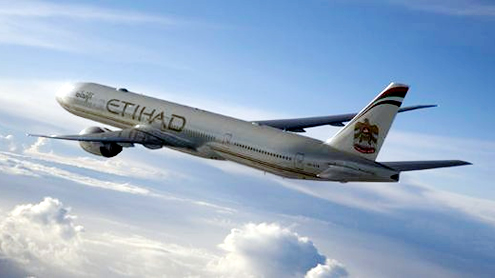 ABU DHABI – Etihad Airways on Monday announced an order for 10 Boeing 787-9 Dreamliners and two Boeing 777 Freighters to expand its fleet to cater to the rising demand of its growing network.

The 12-aircraft order, valued at $2.8 billion at current list prices, will make the Etihad the world’s largest customer of the 787-9 aircraft. The Abu Dhabi-based airline now has a total of 41 787s on order and it will take delivery of planes between late 2014 and 2019. The airline also has options and purchase rights on 25 more 787s. “Our decision to expand our Dreamliner fleet is testimony to Etihad’s commitment to operating one of the youngest and most fuel-efficient fleets in the skies,” Etihad Airways chief executive officer James Hogan said in an e-mailed statement to Khaleej Times. The 787-9 will have the lowest operating cost and lowest fuel burn of any twin engine airplane. It will carry up to 300 passengers and have a range of 8,000 nautical miles, or 14,800 kilometres. The revolutionary aircraft will be initially used on the airline routes to destinations including Dublin, Frankfurt, Kuala Lumpur, Beijing, Nagoya, Delhi and Istanbul.

“In less than 10 years Etihad Airways has established an enviable track record and has earned global recognition for its focus on providing its customers with a quality product,” said Jim Albaugh, chief executive of Boeing Commercial Airplanes. Founded in 2003, Etihad Airways is one of the fastest growing airlines in the world and currently operates scheduled flights to 84 passenger and cargo destinations across Europe, Middle East, Africa, Asia Pacific and North America. “Both the 787 Dreamliner and the 777 Freighter offer highly attractive operating economics and will facilitate our global expansion plans by allowing us to transport passengers and cargo into new markets from our hub in Abu Dhabi,” Hogan said.

The two extra 777 Freighters mean Etihad Airways will have a fleet of 21 777s — 18 passenger aircraft and three freighters. The cargo fleet also includes two A300-600Fs, two A330-200Fs and two MD11Fs. “Etihad’s new order for 787-9’s is good news for Boeing because it shows that customers have greater faith that the company can deliver on its promises now that the first 787-8s have entered service,” Saj Ahmad, chief analyst at FBE Aerospace London, told Khaleej Times. “With the 787-9 largely on track to enter service in 2014, Etihad has locked in lucrative slots as its looks to base its future fleet needs around the 787-9,” he said. Ahmed said Etihad will make use of the capacity at its growing Abu Dhabi hub to provide more one-stop connections for passengers and the 787-9 will allow them to connect to virtually any two city pairs on the planet. – Kheejtimes