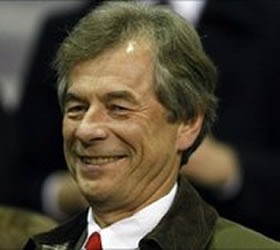 The chairman of British Airways, Martin Broughton, has received a knighthood in the New Year Honours. Sir Martin, who had another high-profile role recently as the chairman who oversaw the sale of Liverpool FC, was honoured for services to business. Also knighted are Centrica and ex-Cadbury’s chairman Roger Carr, Reed Recruitment founder Alec Reed, and the CBI’s director general Richard Lambert. The founders of retailers Ted Baker and Lush have received other honours. Sir Martin, 63, who lives in Oxted, Surrey, had an eventful 12 months dealing with strikes by BA cabin crew and massive disruption to flights caused by snow and the Icelandic volcanic ash cloud. He also oversaw the protracted sale of Liverpool football club, bought by New England Sports Ventures. He had been brought in by the club on a temporary basis with a brief to find a suitable buyer. Sir Martin, married with two children, is a fan of football, and Chelsea in particular, but horse racing is his real love. He is credited with helping to safeguard the future of the horse racing industry during his stint as chairman of the British Horseracing Board between 2004 and 2007.

Sir Roger Carr, 64, who lives in Kensington, west London, has presided over a huge increase in profits at Centrica-owned British Gas, and the controversial sale of Cadbury to the US food giant Kraft. The sale of the chocolate company brought criticism that Britain was selling another of its business jewels into foreign hands. Sir Roger is also chairman of Centrica, which came under fire after its British Gas subsidiary put up prices by 7% in December despite the parent company being forecast to double its profits in 2010.

Sir Alec Reed, 76, gets his knighthood for services to business and charity. He founded the Reed employment company in 1960, and went on to establish a foundation that supports a diverse range of charitable projects. The foundation supports efforts to improve the lives of women around the world, and introduced a much-admired Give As You Earn scheme allowing employees to donate to charities in a tax efficient way. Sir Peter Ellwood, 67, chairman of the packaging company Rexam, is knighted for services to business and the public sector. He spent most of his career in the banking sector, and is former group chief executive of Lloyds TSB. Sir Richard Lambert, 66, a former member of the Bank of England’s Monetary Policy Committee, is stepping down after more than four years as the CBI’s director general. He is a former editor of the Financial Times newspaper. Other business-related honours include CBEs for David Frost, director-general of the British Chambers of Commerce, and for Raymond Kelvin, founder and chief executive of retailer Ted Baker. Mo and Mark Constantine, co-founders of retailer Lush, receive OBEs for services to the beauty industry. The couple started their business in a shed in their back garden but Lush now has more than 600 stores in 43 countries. – BBC