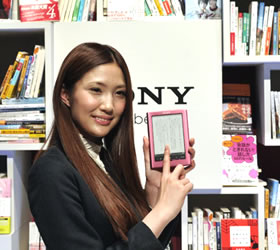 Sony Corp. said Thursday it will release two new e-book readers in December as it aims to secure a leading position in the budding domestic market.”We are pleased to announce our entry into the Japanese e-book market as our new business,” Nobuki Kurita, president of Sony Marketing, said, revealing a first-year sales goal of about 300,000 units.The company is aiming to acquire about half of the domestic market around 2012, when he thinks about 1 million e-book devices from Sony and other companies will be on the market.The two devices, the 5-inch Reader Pocket Edition and the 6-inch Reader Touch Edition, are scheduled to be released on Dec. 10. The Pocket is expected to sell for ¥20,000, and the Touch for ¥25,000.The Pocket is about 9.2 mm thick and weighs 155 grams, while the Touch is 10.3 mm thick and weighs 215 grams. Both types can carry roughly 1,400 books worth of data and boast black and white electronic-paper displays that can be viewed under the bright sunlight.

The books can be read by manipulating the sliding touch-panel screen or pushing buttons. An added stylus pen also allows users to take notes and store other data.With a typical use, the devices last about two weeks on one battery charge.Fujio Noguchi, senior vice president of Sony Electronics in the U.S., said he was confident the Reader series would be able to successfully compete with other e-book readers as they enter the domestic market.”Sony’s strength is that we focus on how we can improve users’ reading experience,” Noguchi said.Unlike its rivals, like Sharp Corp.’s soon-to-debut Galapagos, and Apple’s iPad, which can be used for a variety of purposes, Sony focused on a device especially dedicated to reading.Sony customers will be able to purchase and download e-books from Sony’s online Reader Store, which will debut the same day with more than 20,000 books in stock.The system requires the books to be downloaded to a computer and then transferred to the Reader.The company also said it is considering releasing 3G and Wi-Fi versions of the Readers, which are already available overseas – Japantimes