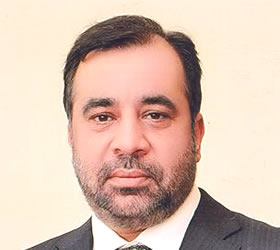 KARACHI: Today the economy is seeing its darkest moment, post flood era and when unanimous efforts are strongly needed to strengthen the country’s economy, said President, Karachi Chamber of Commerce and Industry, Muhammad Saeed Shafiq.“Government is making itself unpopular with irrational and sloppy policies and infuriating the common man/ businessmen’s difficulties leading itself towards doomsday with rapid pace”, Saeed said while addressing as Chief Guest at the third anniversary of a leading multinational cash n carry chain (Metro).The business community is doing protests against petroleum prices, gas outages, exorbitant taxes; a chaos is prevalent in the whole country. Energy crisis has created a fiasco in industries with irreverent increase in power prices, gas load shedding, fueled impetus to manufacturing/production cost. Nagging extortionists dwelling in criminals shelters with powerful backing, law and order situation has taken the peace out from society. Rise in petroleum prices wage inflation to sky-high level, while RGST and Flood Tax acts as the last nail in the coffin paralyzing the already numb economy, added President KCCI.

Muhammad Saeed Shafiq added that the business community should be recognized as the fourth pillar. Government imposes its decisions without any mutual discussion, collective negotiation. This fourth pillar which submits 90% in the Government exchequer is the one mostly screwed and instead of providing relaxation, the sector that is already paying taxes is brought under further taxation which is totally unjustified and the whole business community unanimously rejects Government decision. The recent decision represents Government’s commitment to foreign donors and to assure its luxuries.To further squeeze the already submissive business community is not the valid outcome and would never fulfills Government’s dream of increasing tax base. On contrary it would further deviate the tax payers who are totally numb with the mad roll out by the present government. Our feudal based Executive machinery should come out of their biased and lopsided policies and brings in the sectors not taxed like Agriculture. Today we are moving towards a dangerous Civil War; be it a common man or businessmen, they are on the verge of collapse with the sheer catastrophe and paranoia created by high inflation, worst law and order situation and sky rocket inflation.

Our neighboring countries are performing better than us, Takka – the Bangladesh currency is stronger than Pak Rupee. India has crossed the export target of 100 billion USD.Turkey our brotherly Muslim country stands tall at 130 billion USD exports while Pakistan is still struggling to meet mere 20 billion USD which is extremely discouraging.At this crucial juncture when the economy is on crossroad, the local investors are not keen for expansion or taking any initiatives, the foreign investors are highly lauded for level-heading the momentum, investment and commitment in the country.This is the time when the local industry is in fear of collapse and at this moment if the multinationals are investing here, it should be highly applauded.Talat Mahmood, Senior Vice President KCCI and Managing Committee members were also present at the event. The multi-national chain’s Head of Trade also shared the company presentation, its achievements and future plans. Awards were also distributed to best performing buyers and a cake for three-year anniversary was also cut at the occasion – Dailymailnews