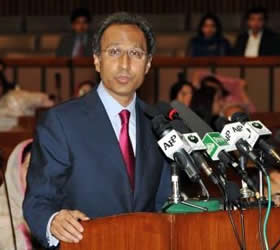 Minister for Finance and Economic Affairs, Dr. Abdul Hafeez on Sunday termed the first seession of the two-day Pakistan Development Forum (PDF) as productive and successful.Discussions with the representatives from about 30 countries and the United Nations, World Bank, International Monetary Fund, Islamic Development Bank and Asian Development Bank have been fruitful and productive, Hafiz Shaikh told media persons after the conclusion of the first-day deliberations of PDF. He said that during the first session the representatives of provincial governments including AJK and Gilgit Baltistan briefed about the aftermaths of flood and their future planning for reconstruction and rehabilitations in their respective provinces and areas. He said that Pakistan Development Forum is about public discussions and we want to share the experiences and ideas of development with the partners. He added that government wanted economic reforms to overcome problems and there is a political will and we want to share ideas of others  for the  development of our country and the people.

The second session, he said, discussed about impact of floods on the national economy and how to tackle the stages of relief, rescue and  rehabilitation and decision of allocating Rs. 160 billion among the flood victims  taken by the Council of Common Interest (CCI), he added. The last sitting, he said was about social sector development which particularly focused on the vulnerable section of  the society at the time when country was passing through economic transition stage, he added. The minister said that during the period of economic transition government was striving to make such policies which could address the problems of the poorest of the poor. The second day of PDF 2010 would include a plenary session which would discuss about the economic direction,fiscal and monetary policy besides discussing the growth strategy. The utilization of foreign assistance and aid with a proper mechanism would also come under deliberations during the tomorrow session of the PDF. -App