KP to lease out cricket stadium to sport association 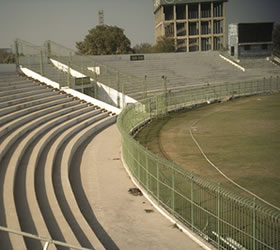 PESHAWAR: The provincial government of Khyber Pakhtunkhwa has decided to lease out Arbab Niaz Cricket Stadium to District Peshawar Cricket Association, which would be responsible for its up gradation and converting it to a stadium of international standard.The decision was taken in a meeting held here with Provincial Minister for Sports, Aqil Shah in the chair. Others who attended were included Secretary Sports and Culture Muhammad Azam Khan, Director Sports Mir Bashar and other concerned authorities attended the meeting.Speaking on the occasion, Syed Aqil Shah directed the Sports Director to work out modalities in regard leasing out the stadium. He said that in future wherever any sports facility would be created in the province, it should be self- sustainable.
He also directed to grant cash awards to the best performing players out of the fund of Khyber Pakhtunkhwa Sports Foundation. He said for the promotion of sports, regular holding of talent hunt tournaments as well as provision of sports facilities were indispensable.
The provincial minister further directed to handover the sports grounds of all the provincial departments except Elementary and Secondary Education department to Khyber Pakhtunkhwa Sports Board.
He asked the Khyber Pakhtunkhwa Sports Board to develop two available sports grounds in Civil Quarters so that inter-schools tournaments could be held there. Aqil Shah also directed the Sports Director to immediately convene a meeting of District Sports Officers of the province with complete details of sports grounds in their respective districts, takeover the charge of Hayatabad Sports Complex from Director General PDA and complete all necessary formalities in regard constructing of Guest House and Conference Hall at Peshawar Sports Complex – App