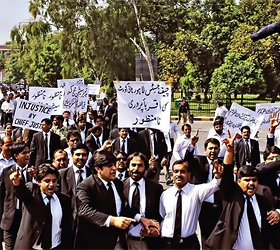 LAHORE – A group of unruly lawyers, belong to Lahore Bar Association on Thursday stormed the courtroom of Lahore High Court Chief Justice, smashed the windowpanes and damaged the walkthrough gate outside the courtroom.

Led by LBA President Sajid Bashir, Vice-President Lubna Mahmood and Abdul Samad, about 150 lawyers, marched towards High Court from Aiwan-e-Adl and forced their entry through LHC GPO Chowk gate. They stormed the CJ’s courtroom at about quarter past one where they chanted full-throat slogans against the CJ and D&SJ Lahore Zawar Ahmad Sheikh.

In the prevailing scenario when a showdown like situation exists between the PPP government and the superior judiciary, this show of anger culminated into defiling the sanctity of the CJ court, is being interpreted as a very serious matter.

Sajid Bashir, however, denied any damage to the courtroom during the protest. “We have recorded our protest peacefully and it was the agencies persons who smashed the windowpanes on the instigation of the other side,” he alleged while talking to TheNation. Later when the infuriated lawyers went back, CJ Khwaja Muhammad Sharif convened a meeting of senior judges, LHC Registrar and Members Inspection Team that was later also joined by CCPO Aslam Tarin.

The LBA has been demanding the transfer of District and Sessions Judge Lahore Zawar Ahmad Sheikh for the last many months. The lawyers have accusing the judge of misconduct and humiliating attitude towards them.
On the other hand, a group of lawyers described the resentments of lawyers as allegedly ignited by a handful of them who wanted their share in the recruitment of clerks in the lower judiciary which the D&SJ had denied. The bar office holders, however, deny this claims.

Meanwhile, the city police arrested dozens of lawyers allegedly for smashing windowpanes at the LHC CJ courtroom and disrespect for the court. The case was registered at the Old Anarkali Police Station against the lawyers.
The police arrested the lawyers, from civil court at 5:40pm, including LBA President Sajid Bashir, Secretary Qasim Hassain Bhuttar, Punjab Bar Council vice chairman and others.

When contacted the police officials of the Sanda Police Station, Lower Mall, Islampura and Old Anarkali, they denied the presence of the lawyers at their respective police stations, saying they had no information in this regard.
Meanwhile, the LBA president, in an SMS to this scribe, informed that he and other six lawyers were taken to Manga Mandi Police Station while other arrested lawyers might have been kept at police stations in Lahore.
Meanwhile, Punjab Chief Minister Shahbaz Sharif strongly condemned ransacking and agitation in the office of LHC CJ, said a handout issued on Thursday night – Nation