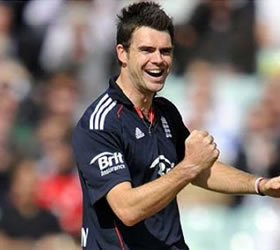 LONDON: England pacer James Anderson became the first cricketer to pose naked for a gay magazine when he appeared in the front cover of the latest edition of Attitude.

The 28-year-old right-arm fast bowler, who is married and has a child, appeared in a naked shot inside the latest edition of UK’s best-selling gay magazine, Attitude.

Soon after posing naked, Anderson said he believed there was no homophobia in cricket and gay players should feel comfortable coming out.

“There’s a perception of lots of committees and old men being quite prim and proper, but I think the game is moving with the times,” he was quoted as saying by BBC Sport.

“If there are any gay cricketers they should feel confident enough to come out because I don’t think there is any homophobia in cricket,” he said.

Anderson said he was delighted to avail the opportunity even though he knew he would come for sharp criticism from some quarters for his daring act.

“I think I probably will get some stick for it but I’m more than prepared for that. I’m quite happy to take it, because I’m delighted that I’ve had the chance to do it. I would never change it,” the English pacer said.

“If they want to give me some stick, let them give me their best shot,” he added. – Timesofindia