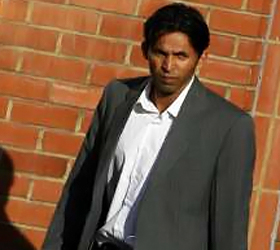 LONDON: A police file detailing evidence on claims that Pakistan cricketers accepted cash bribes to take part in spot-fixing during a match against England has been handed over to prosecutors. Scotland Yard said evidence that there was a conspiracy to defraud bookmakers will be considered by the Crown Prosecution Service (CPS). Detectives interviewed four players under caution and arrested businessman Mazhar Majeed as part of the inquiry. Majeed is accused of accepting 150,000 pounds to fix the actions of several players during a Test at Lord’s.

“The Metropolitan Police Service has today delivered an initial file of evidence relating to conspiracy to defraud bookmakers to the Crown Prosecution Service,” a police spokesman said. “The file will now be subject to CPS consideration. This is an initial file and the Met investigation continues.” The controversy that has shaken cricket to its core erupted over claims of corruption after allegations surfaced in the News of the World newspaper. Majeed is accused of accepting cash to ask players to deliberately bowl no-balls during their tour of England.

Captain Salman Butt, Mohammad Asif, Mohammad Aamer and Wahab Riaz have all been interviewed under caution. The players have been suspended by the International Cricket Council (ICC) but deny any wrongdoing – Timesofindia