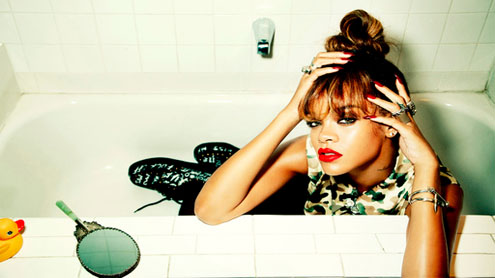 RIHANNA is playing seven gigs in seven cities – and has hired a jumbo jet for the trip.

She’ll need a very big drinks trolley.Her week-long 777 tour kicks off on November 14 and will call in at London, then Paris, Toronto, Berlin, Paris, Stockholm and New York to mark the release of her new album, Unapologetic.The plane will be carrying 200 people, including fans and her entourage.

A source said: “Rih has asked for hundreds of bottles of £300 Armand de Brignac champagne.“She has pledged to get on the loudspeaker during the trip and perform on the plane.“She’s also asked for blankets and pillows branded with her logo. – Thesun