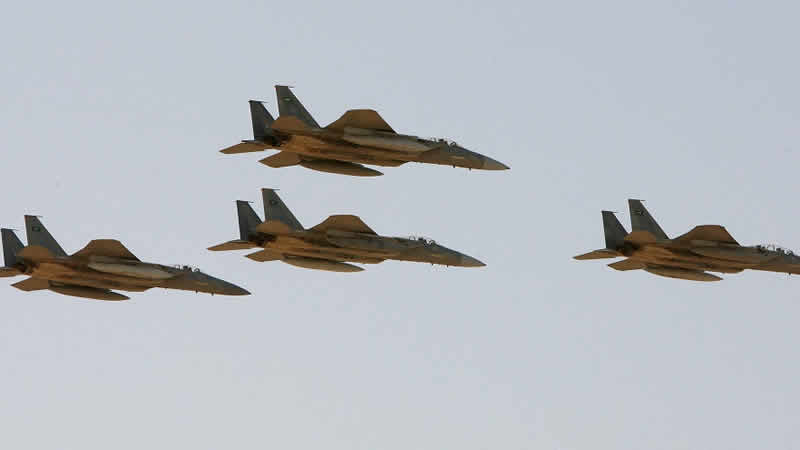 Washington and Doha have signed an agreement for the purchase of F-15 fighter jets with an initial cost of $12bn, as US President Donald Trump’s administration attempts to navigate an ongoing diplomatic crisis in the Gulf.

The aircraft purchase was completed by Qatari Minister of Defence Khalid Al Attiyah and his US counterpart Jim Mattis in Washington DC on Wednesday, according to Qatar News Agency (QNA). Attiyah said the agreement underscores the “longstanding commitment of the state of Qatar in jointly working with our friends and allies in the United States in advancing our military cooperation for closer strategic collaboration in our fight to counter violent extremism and promote peace and stability in our region and beyond”. The deal is “yet another step in advancing our strategic and cooperative defence relationship with the United States, and we look forward to continuing our joint military efforts with our partners here in the US”, said Attiyah.

The sale “will give Qatar a state-of-the-art capability and increase security cooperation and interoperability between the United States and Qatar”, the Defence Department said in a statement. The weapon transfer comes just weeks after Trump signed a deal with Saudi Arabia for almost $110bn in US arms. It also comes amid a diplomatic row between a Saudi-led bloc of nations and Qatar.

Saudi Arabia, United Arab Emirates (UAE), and Bahrain and a number of other countries severed relations with Qatar earlier this month, accusing it of supporting armed groups and Iran – allegations Qatar has repeatedly rejected. Riyadh also closed its border with Qatar, the only land border the emirate has. In addition, the closure of Saudi, Bahraini, and Emirati airspace to Qatar-owned flights has caused major import and travel disruptions.

As the Saudi-led bloc moved against Qatar, the US Secretary of State Rex Tillerson’s attempts to remain neutral were overshadowed by a series of heavy-handed tweets from Trump, in which he accused Qatar of supporting “terror”. The US stance amid the Gulf’s diplomatic rift was thrown into further confusion last week when Tillerson called on Saudi Arabia to ease the blockade on Qatar.

The US’ top diplomat has since attempted to mediate between the two sides, and on Tuesday the State Department said efforts to resolve the crisis were “trending in a positive direction”.

On Wednesday, Rex Tillerson – in testimony before the House Committee on Foreign Relations – said it was problematic to list the entirety of the Muslim Brotherhood – one of the “extremist” groups the Saudi-led block has accused Qatar of supporting – as “terrorists”.

The crews of the two vessels were received by Qatari navy officers. It was unclear if the arrival of the two warships was planned before the Gulf rift or if was a sign of support from the Pentagon. Qatar hosts the biggest US military base in the Middle East with 11,000 troops deployed to or assigned to Al-Udeid Air Base. More than 100 aircraft operate from there.