10 killed in US School Massacre 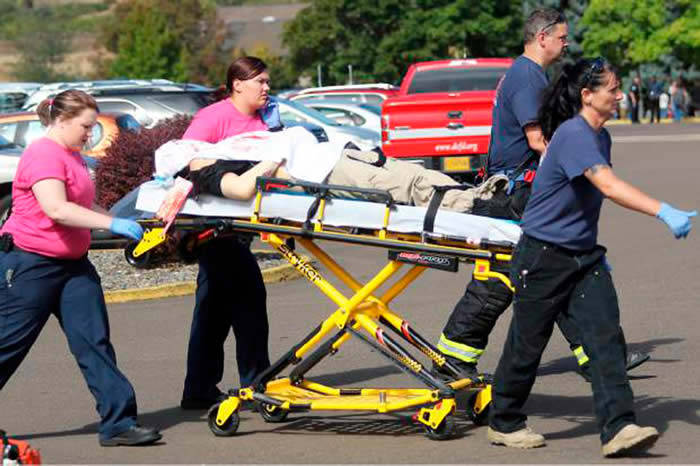 A gunman went on a shooting rampage at a college in the US state of Oregon on Thursday, killing 10 people and wounding seven before he died in a shootout with police.

A visibly angry President Barack Obama made an impassioned plea for gun control in the wake of the shooting, blasting Congress for its failure to act in the face of “routine” mass killings.

The man ─ identified by US media as Chris Harper Mercer, 26 ─ opened fire in a classroom at Umpqua Community College in rural Roseburg, and moved to other rooms methodically gunning down his victims, witnesses said. Douglas County Sheriff John Hanlin said 10 people were killed and seven were injured, several critically. He said the victims’ identities would not be released for 24 to 48 hours. Hanlin confirmed that authorities believed they had identified the shooter, but declined to release his name. “You will never hear me mention his name,” Hanlin said. “I will not give him the credit he probably sought prior to this horrific and coward live act.”

A candlelit vigil was being held Thursday at 8pm in Roseburg, a close-knit logging community with many locals among the 3,300 students at the college. Witnesses quoted in the United States media described scenes of terror and panic as the tragedy unfolded. Student Cassandra Welding was inside the college when she heard 35 to 40 shots coming from an adjacent room. She saw a fellow student be shot after opening the classroom door to see what was happening. “Then we locked the doors, turned off the lights and … we were all pretty much in panic mode and called 911 (emergency services) and our parents and (said) ‘I love yous’ because we didn’t know what would happen, if those were our last words.”