by ToP
in India, Pakistan
0 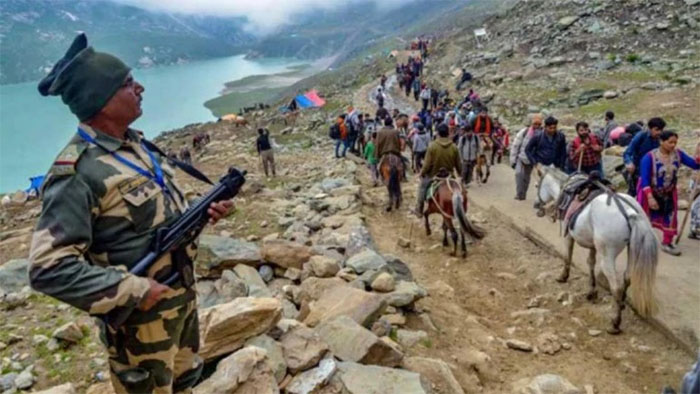 The Jammu and Kashmir (J&K) administration on Friday issued a security advisory for the Amarnath yatra pilgrims, citing terror threat in the Kashmir Valley. In view of the “prevailing security situation in Kashmir”, the J&K government advisory said that the pilgrims may curtail the Amarnath yatra. It also asked the pilgrims and the tourists to leave the Kashmir Valley as soon as possible.

Citing the latest intelligence inputs of the terror threats in the Kashmir Valley, the security advisory issued by the J&K administration stated that the Amarnath pilgrims and the tourists “may curtail their stay in the Valley immediately and take necessary measures to return as soon as possible”.

The security advisory to the Amarnath pilgrims and the tourists in the Kashmir Valley read: “Keeping in view the latest intelligence inputs of terror threats, with specific targeting of the Amarth Yatra, and given the prevailing security situation in the Kashmir Valley, in the interest of safety and security of the tourists and Amarnath Yatris, it is advised that they may curtail their stay in the Valley immediately and take necessary measures to return as soon as possible.”

Reacting to the security advisory, former J&K Chief Minister Omar Abdullah said, “Although this unprecedented order would seem to suggest a genuine fear of a massive terror strike directed at Amarnath ji yatris or/and tourists this will do nothing to dampen the sense of fear & foreboding that prevails in the valley at the moment.”

The security threat has been issued just hours after the Indian Army recovered a Pakistan Ordnance factory anti-personnel mine from a terror cache. The Army also said that terrorists from Pakistan “are plotting to carry out an attack on the ongoing Amarnath yatra”.

“A Pakistan Army landmine has also been recovered from one of the caches of terrorists. This clearly indicates that Pakistan Army is involved in terrorism in Kashmir, this will not be tolerated,” Lt General KJS Dhillon, Commander of the Chinar Corps, said in a press conference in Srinagar.