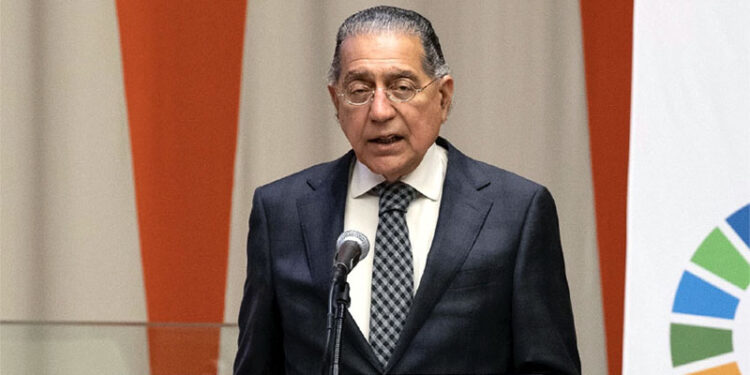 “Failure to do so entails risks to regional peace and security in a nuclearised South Asia and beyond,” Ambassador Munir Akram warmed in an address to the Commission, which operates under the UN General Assembly and deals primarily with issues relating to disarmament.

The Pakistani envoy also drew the Commission’s attention to India’s “accidental” launching of a supersonic nuclear-capable missile into Pakistan’s territory on March 9, saying it reveals serious gaps in that country’s ability to manage its strategic assets.

Continuing his remarks about the threat to South Asia peace, he said it stems from India’s brutal suppression of the people of Indian-occupied Jammu and Kashmir; its demonstrated aggressive posture towards Pakistan; its unbridled accumulation of conventional and strategic weapons which are mostly deployed against Pakistan.

“We once again urge the international community not to neglect the threat to peace and security in South Asia,” Ambassador Akram said.

“India must halt its massive violations of human rights in occupied Jammu and Kashmir; it must halt its endeavour to settle Hindus in Kashmir to turn its Muslim majority into a minority; it must implement the resolutions of the Security Council prescribing a plebiscite to enable the people of Jammu and Kashmir to decide their own political destiny.”

Negotiations, he said, are the only pathway to peace. “A response to the wishes of the people is often the simplest path to conflict resolution,” the Pakistani envoy said, adding, “Palestine and Kashmir await the exercise of their right to self-determination.”

Elaborating the March 9 missile incident, Ambassador Akram said, “If this was a deliberate provocation, it was a highly reckless and dangerous act.

“If Pakistan had concluded that this was a nuclear-armed missile- launched in pursuance of recent Indian threats of a preemptive nuclear strike against Pakistan- we could have launched an immediate, retaliatory strike,” he said, adding that Pakistan’s self-restraint had prevented the outbreak of a nuclear conflict between the two countries.

“It is also a testament to Pakistan’s effective command and control over our strategic assets.”

Pakistan, he said, had conveyed a series of questions to India through the UN Security Council and the Secretary-General, including a call for the measures and procedures in place to prevent accidental missile launches and the particular circumstances of this incident; the type and specifications of the missile that fell in Pakistani territory, and the flight path/trajectory of the accidentally launched missile and how it ultimately turned and entered into Pakistan.

He also asked whether the missile was equipped with self-destruct mechanism, why did it fail to actualize, as also whether Indian missiles are kept primed for launch even under routine maintenance.

In addition, the Pakistani envoy pointedly asked, “Why did India fail to inform Pakistan immediately about the accidental launch of the missile and waited to acknowledge it until Pakistan announced the incident and sought clarification?

“Given the profound level of incompetence, India needs to explain if the missile was indeed handled by its armed forces or some rogue elements?”

“We are still awaiting India’s response,” Ambassador Akram said, hoping that India would provide its answers to these questions in the Disarmament Commission.