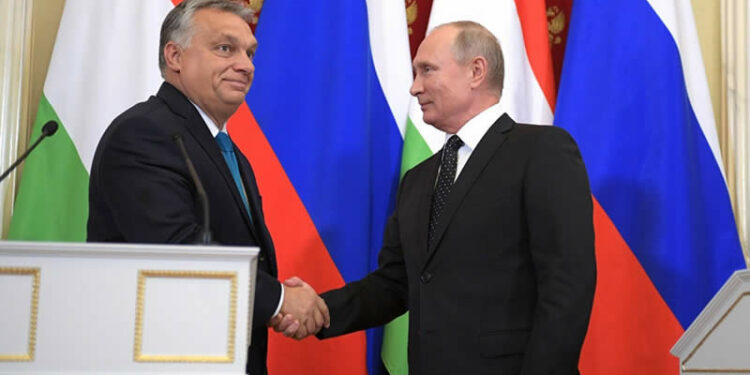 The crisis surrounding Ukraine shines the spotlight on Hungary’s prime minister’s relationship with the Russian president.

Former communist states in Central and Eastern Europe are at the forefront of efforts to punish Russia for its invasion of Ukraine, but Hungary is dragging its feet.

Budapest has condemned Russia’s attack on its neighbour and refrained from vetoing European Union sanctions. However, in the face of increasing unity among Hungary’s EU and NATO partners, Prime Minister Viktor Orban is resisting actions that could threaten his close relations with Russian President Vladimir Putin.

Instead, the Hungarian leader, who over the past decade has provoked suspicion from Western partners with his efforts to make himself the closest of any EU leader to Moscow and Beijing, is employing a favourite tactic: the so-called “peacock dance”, a political strategy Orban has said is designed to deflect criticism of his illiberal policies by offering cosmetic or rhetorical concessions.

His ruffled feathers were on full display on March 1 as Hungary belatedly said it would support earlier calls from other former-Warsaw Pact states such as Poland and Czechia to fast track EU membership for Ukraine. However, by that point, it had become obvious that no such offer would be put on the table anyway.

The Hungarian prime minister has followed what is politely called a “multi-vector” foreign policy throughout his 12-year rule, during which opponents say he has grown increasingly authoritarian. But critics inside and outside Hungary have long called for an end to this two-faced approach.

“Hungary has acted as a parasite, enjoying the benefits of EU and NATO membership while pushing Russian and Chinese interests,” asserts Daniel Hegedus, a Hungarian analyst at the German Marshall Fund of the United States.

The crisis surrounding Ukraine is shining the spotlight on this balancing act.

While Hungary has gone along with EU sanctions and is accepting Ukrainian refugees, it is also avoiding the sort of palpable bilateral moves that its neighbours in Central and Eastern Europe are pursuing.

“Orban is in a tight spot,” said Peter Balasz, a former foreign minister and EU commissioner. “He wouldn’t have the courage to oppose joint EU action directly. But he’s still playing Russian music when he can.”

Energy deals “must be left out of the sanctions issue, because otherwise we will pay the price of the war, and nobody wants that”, Orban told Hungarian TV. The invasion of Ukraine, he explained, will not affect Hungary’s deal for Russia to build and bankroll the Paks 2 nuclear plant south of Budapest.

The Soviet-era International Investment Bank (IIB) has also been assured that it will remain welcome in Budapest, despite warnings from the United States that it hosts Russian spies. Bulgaria, the Czech Republic, Poland, Romania and Slovakia announced on March 2 that they will quit the institution.

Most pertinently, while the world is rushing to arm Ukraine’s defence forces, Hungary has not only said it will not send weapons to its neighbour, but it is blocking their transit. That leaves others bordering Ukraine such as Poland and Slovakia – states that Hungary likes to co-opt as supporters in its regular tussles with Brussels – to act as hubs.

“Such deliveries might become targets of hostile military action,” Foreign Minister Peter Szijjarto said, insisting his country does not want to get involved in the war next door. “We have to ensure the security of Hungary.”

But Orban, who says those seeking to send arms to Ukraine are “pouring gasoline on the fire”, is struggling to remain uninvolved as the global reaction to Russia’s aggression builds.

“Viktor Orban must decide on which side he stands,” said Manfred Weber, head of the centre-right EPP faction in the European Parliament, as he called the block on weapons transports an “unbelievable double game”.

The pressure is also being encouraged by Hungary’s united opposition, which hopes to finally remove the prime minister’s Fidesz party in elections on April 3.

The war in Ukraine comes at a particularly inconvenient time for Orban. In the upcoming election, he is facing his first significant political challenge since 2010 due to competition from a six-party opposition coalition.

Polls are tight, and the Russian invasion offers his rival an obvious opportunity. Peter Marki-Zay, who will compete with him for the prime minister’s chair, has added to the calls for Orban to declare his loyalty clearly.

But the prime minister is in a tight spot, and he cannot afford to distance himself from Russia, observers say.

While his populist and illiberal campaigns against migrants, sexual minorities and the EU tend to grab the international headlines, it is widely noted inside Hungary that its Fidesz’s populist economic policies that drive the bulk of the party’s support.

The lowest energy prices in Europe are the cornerstone, the importance of which has only grown during the recent spike in costs, and for that Orban depends crucially on Russian favour.

“It’s hard to overestimate how dependent Orban is on Russian energy,” says Gabor Gyori at the Policy Solutions think-tank in Budapest. “The war is very likely to sway some voters in the upcoming election, but if utility bills were to rise significantly Fidesz would be toast.”

The prime minister is well aware of the risk. “If we were to end energy cooperation with Russia, the energy bills of every Hungarian family would triple in a single month,” Orban said in an interview with pro-government media on March 2.

But it is not just the risk of energy inflation that compels Orban to continue his balancing act, even if he is now forced to walk a much higher wire.

If he were to break with Putin, points out Hegedus, Orban would be admitted in the middle of the election campaign that his 12-year push to build close links with the Russian leader was a drastic mistake, and a failure.