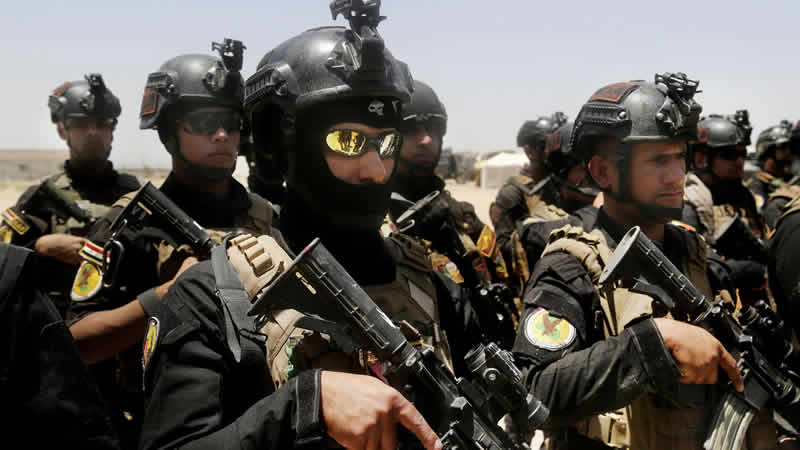 Elite Iraqi troops were poised Sunday to assault one of the Islamic State group s most emblematic bastions, Fallujah, as the jihadists counterattacked in both Iraq and neighbouring Syria.

The fighting prompted a new exodus of thousands of desperate civilians and deep concern for the many more trapped in the battlegrounds.

The overall commander of the Fallujah operation, Abdelwahab al-Saadi, said Saturday it was a matter of hours before the Counter-Terrorism Service (CTS) entered the city. The week-old operation has so far focused on retaking villages and rural areas around Fallujah, which lies just 50 kilometres (30 miles) west of Baghdad. I won t tell you hours but the breach of Fallujah will happen very soon,” Hadi al-Ameri, a senior commander in the Hashed al-Shaabi paramilitary force, told Iraqi television. CTS s involvement will mark the start of a phase of urban combat in a city where US forces in 2004 fought some of their toughest battles since the Vietnam War. The jihadists were also under pressure from Kurdish fighters east of their northern Iraqi stronghold Mosul and from US-backed Kurdish-led fighters in Syria.

Iraq s autonomous Kurdish region on Sunday announced the launch of a pre-dawn offensive involving 5,500 peshmerga fighters to retake an area on the road between its capital Arbil and Mosul. This is one of the many shaping operations expected to increase pressure on ISIL (IS) in and around Mosul in preparation for an eventual assault on the city,” the Kurdistan Region Security Council said in a statement. Ten hours into the operation, which was launched a day after a wave of 12 coalition air strikes in the area, Kurdish forces had fully retaken three villages, it said. In Syria, Kurdish rebels from the People s Protection Units (YPG) allied to Arab fighters and backed both on the ground and in the air by the US-led coalition, were targeting Raqa, IS s de-facto Syrian capital. IS countered in both countries where they declared their “caliphate” in 2014, attacking non-jihadist rebels in Syria as well as the Iraqi town of Heet, which the army recaptured just last month.

An attack by Daesh (IS) terrorists on several parts of Heet was thwarted… Now the whole area is under control,” the Joint Operations Command said in a statement. It said coalition aircraft targeted IS forces during the attack and added that pockets of jihadists remained. Daesh attacked Heet to ease the pressure on their fighters inside Fallujah, especially following the announcement that CTS had arrived,” the statement said. Northeast of Baghdad on Sunday, police said a suicide bomber killed at least seven people and wounded 22 when he blew himself up in a cafe in Moqdadiyah, in an attack claimed by IS. In northern Syria, the jihadists have launched an offensive against the towns of Marea and Azaz that threatens to overrun the last swathe of territory in the east of Aleppo province held by non-jihadist rebels. It would also bring IS to the doorstep of the Kurdish enclave of Afrin. As the fighting raged on multiple fronts, civilians were once again bearing the brunt of the conflict.

At least 29 civilians have been killed since IS began the assault in Aleppo province early on Friday, the Syrian Observatory for Human Rights said. More than 6,000 civilians fled into the countryside, it said. Northwest of Azaz, a senior nurse said late Saturday that a hospital supported by Doctors Without Borders (MSF) was closed except for emergencies. MSF said on Friday it was evacuating patients and staff from the hospital in Salamah town as it was just three kilometres (two miles) from the front line. In Iraq, only a few hundred families managed to slip out of the Fallujah area, with an estimated 50,000 people still trapped inside the city proper. According to the Norwegian Refugee Council, around 3,000 people have managed to escape the Fallujah area since May 21. The biggest wave so far arrived on Saturday night, NRC said, but a larger influx could be triggered when the urban battle between CTS and IS begins in earnest. Our resources in the camps are now very strained and with many more expected to flee we might not be able to provide enough drinking water for everyone,” said Nasr Muflahi, NRC s Iraq director. We expect bigger waves of displacement the fiercer the fighting gets.”

U.S. sees first case of bacteria resistant to all antibiotics