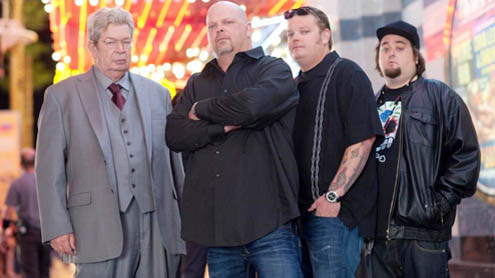 The stars of the cable reality show “Pawn Stars” have left their Las Vegas pawn shop to meet fans in Southeast Asia. And one of them says he never thought they would be so popular.

Father-and-son duo Richard and Corey Harrison run the pawn shop with the family patriarch. They offered tips to fans in Manila about bargaining and putting value on things.On the Philippine TV show “ANC Mornings,” Corey Harrison said Friday that he never thought the show would be a hit in the U.S., much less around the world.Before the show began airing in 2009, their shop usually had fewer than 70 customers a day. Now it sees 3,000 on a slow day, he said.

“Celebrities are starting to drift into the pawn shop. They’re seeing it on TV and they want to come check it out,” he said.He said Steve Carrell will be on an episode coming up soon. “It was really kind of strange asking Steve, like, ‘Hey man, do you mind, I know you make millions of dollars in these movies, will you be on my show for free real quick?'”

Harrison also gave would-be customers some advice.”I can honestly say that if you come into the shop and you’re rude and you’re angry and you’re bothering me … I am probably going to give you a lower price than I normally would,” he said. “If I have a good time with you and I actually enjoy doing business with you, I generally don’t mind paying a little bit more.”Aside from the Philippines, the Harrisons also will visit Singapore and Malaysia. Their show airs on History Channel. – AbcNews