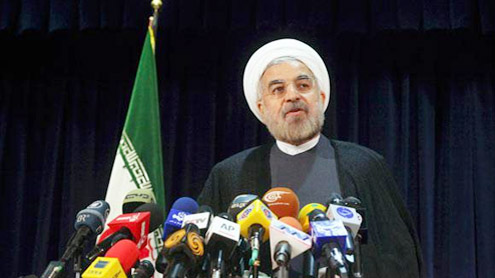 DUBAI: A former Iranian nuclear negotiator who is running for president used his first television appearance of the campaign to reject accusations he had been too soft in negotiations with world powers.

The most prominent moderate candidate in an election dominated by hard-liners, cleric Hassan Rohani, nuclear negotiator from 2003 to 2005, oversaw an agreement to suspend Iran’s fledgling uranium enrichment-related activities.Hard-liners see the nuclear program as a sign of national pride and any concession to outside pressure an affront to Iran’s sovereign rights. The current nuclear negotiator, Saeed Jalili, is running for president on his record of giving no ground in talks.

In a spirited exchange on state television on Monday evening, Rohani said allegations he had halted nuclear development were “a lie” and suggested his interviewer was “illiterate.”“It’s good if you study history,” a smiling Rohani, dressed in the traditional clerical garb, told the besuited interviewer. “We suspended it? We mastered the (nuclear) technology!”The 64-year-old argued the Islamic Republic had expanded uranium enrichment during his tenure while demonstrating the program’s peaceful nature and preventing a US military attack.“We didn’t allow Iran to be attacked,” he said, referring to the US military campaigns in Afghanistan and Iraq.“They (the US) imagined tomorrow or the day after, it would be Iran’s turn.” – ArabNews