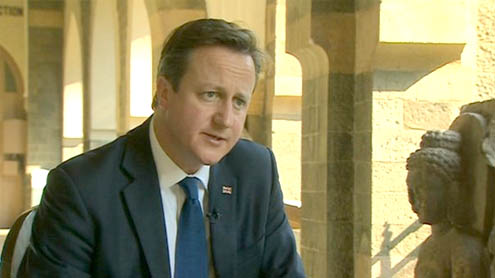 David Cameron has urged the Indian government to cut “regulation and red tape” in a bid to encourage more trade and investment involving UK businesses.

The prime minister said India “can be a difficult country to do business in” but insisted he wanted the UK to become India’s economic “partner of choice”.He wanted to see UK firms playing a bigger role in a “more open, more flexible” Indian economy, he said.Mr Cameron is on a three-day visit to India with a British trade delegation.The PM has also outlined a same-day visa scheme to make the process easier for India’s business community.During what is Mr Cameron’s second trip to India as UK PM, he is due to meet Prime Minister Manmohan Singh and President Pranab Mukherjee.

Speaking to the BBC’s Jon Sopel, Mr Cameron said he would examine with his Indian counterpart how to “take down the barriers” between the two countries.”We’ll be saying to the Indians: ‘We’d like to see your economy more open, more flexible, more easy to invest in, so that British firms in insurance or banking or retail can play a bigger part in the Indian economy.'”It’s a conversation we need to have, but a conversion that has two sides.”The prime minister insisted that India was “one of the great success stories of this century”, adding that he believed it would be a “top three [world] economy” by 2030.

“I want Britain to be its partner of choice, helping to build those motorways, helping to provide those universities, helping to invest in healthcare and also encouraging Indian investment back into the UK,” he said.But Mr Cameron sounded a cautionary note over corruption in India, while admitting the British economy was not immune to rogue trading.He said: “I don’t come here to preach to anybody, but clearly every country has to be on their guard against bribery and corruption as the Indians themselves know.”

Mr Cameron arrived in Mumbai on Monday with the biggest entourage of British business people ever taken on an overseas trip by a UK prime minister.Those represented include BAE Systems, Rolls-Royce, the London Underground and the English Premier League.At a question-and-answer-session at Unilever headquarters in Mumbai, Mr Cameron said: “India’s rise is going to be one of the great phenomena of this century and it is incredibly impressive to see.”We’ve only just started on the sort of partnership that we could build. As far as I’m concerned, the sky is the limit.”

Mr Cameron promised up to £1m to help fund a feasibility study into using British expertise to develop a “business corridor” between Mumbai and Bangalore.”It would unleash India’s potential along the 1,000 kilometres from Mumbai to Bangalore, transforming lives and putting British businesses in prime position to secure valuable commercial deals,” he added.Among the businessmen joining Mr Cameron on the trip is the chief executive of the English Premier League, Richard Scudamore, who told the BBC that football was the fastest growing sport in India.He said interest in the league had been growing exponentially.

“Ten years ago it was very small, and it’s grown and we’ve just concluded our deals for the next three years, and we’ve had exponential growth here both in audience and revenue terms, so it’s an increasingly important market for us.”Mr Scudamore added that the Premier League runs a skills and coaching initiative in India, in conjunction with the British Council, to further Indian interest in the sport.Another of the trip’s aims is to address controversy over the recent toughening of UK visa rules.Mr Cameron said there was no limit on the number of Indian students that could come to British universities, as long as they had an English language qualification and a place to study.

In a round of TV interviews in Mumbai, Mr Cameron said Britain welcomed Indian university students.”We want to make sure that we are attracting… the best and the brightest,” he said.”And in terms of our visa operation here in India, it is the biggest one we have anywhere in the world. Nine out of 10 of those who apply for a visa get one.”The prime minister also spoke of making Britain’s visa system simpler for Indian businesses.”We are introducing today a same-day visa service for business people who want to come to Britain for linking up their businesses for trade and other things like that,” he said.Later on Monday, Mr Cameron visited a memorial to the 16 Indian police officers killed during the terror attacks in Mumbai in 2008.The prime minister laid a wreath in respect and listened as an honour guard played the Last Post.