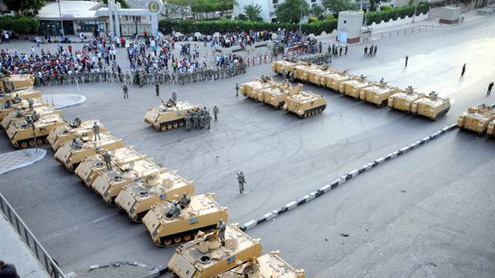 Egypt’s state of emergency, that gave security forces sweeping powers to detain suspects and try them in special courts, has ended after 31 years.

It has been in place without interruption since the assassination of President Anwar Sadat in 1981. Lifting the law was a key demand of activists in last year’s uprising against President Hosni Mubarak. Egypt’s military rulers, who took charge after the ousting of Mr Mubarak, indicated they would not renew the law. Some Egyptians had feared the country – preparing for a presidential election run-off- would be left in a power vacuum without the law, which expired at midnight on Thursday. The Supreme Council of the Armed Forces (Scaf) issued a statement to reassure the country that it will “continue to carry its national responsibility in protecting the country until the transfer of power is over”.

“This is huge,” said Hossam Bahgat, a human rights activist who had long campaigned to lift the law. “What is really crucial is the message. The security forces operated under a culture that told them they were constantly above the law. Now they need to abide by the existing legislation and they won’t enjoy any extra-legal powers.”  US State Department spokesman Mark Toner described the lifting of the emergency law as “a step in the direction” towards democratic transition. The emergency law was a key feature of the rule of President Mubarak, who repeatedly broke promises to lift it. ‘Thuggery’ At one point, human rights groups estimated there were more than 10,000 people in detention – many of them disappearing in Egyptian prisons.

In January the head of Scaf, Field Marshal Hussein Tantawi, partially eased the law except in the cases of “thuggery”, without explaining exactly what that meant. The interior ministry is currently dealing with at least 188 people under the law, according to Human Rights Watch. However, there are some who believe the state of emergency should have been renewed. Cairo resident Reda Abdel Fatah told Reuters: “The army should continue until the end of the transitional period, because if they leave now it will be chaos.” Egypt is preparing for a run-off vote in the presidential elections which will be held on 16-17 June. The two contenders are the Muslim Brotherhood’s Mohammed Mursi and former air force commander Ahmed Shafiq, who was President Mubarak’s last prime minister. -BCC