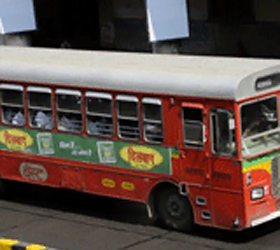 BHOPAL: At least 17 people were killed and a further 35 feared dead after a passenger bus plunged into a fast-flowing river in central India, police said Thursday.

The bus crashed into the river when trying to cross a flooded bridge in the state of Madhya Pradesh on Wednesday evening.

“The rescue work is ongoing and specialist teams are at the scene searching for bodies washed away by the water,” local inspector general of police Pawan Jain said.
“We are uncertain of the number of people travelling in the bus, but it might have been between 70 and 80. About 25 people are being treated for injuries in hospital.”

The crash occurred at a crossing of the Bagdi river in Dewas district, about 100 kilometres (60 miles) from Bhopal, the state capital of Madhya Pradesh.
India has the highest annual road death toll in the world, according to the World Health Organization, with accidents caused by speeding, careless driving, poor roads, overcrowding and poor vehicle maintenance – Geo.tv