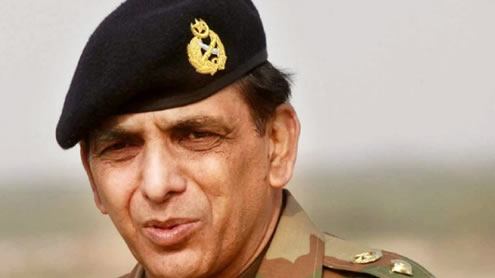 The army chief General Ashfaq Parvez Kayani through a press release issued by the Inter-Services Public Relations on Sunday stated that he would retire on November 29, 2013, the day on which his tenure is scheduled to end.

General Kayani was granted a three-year extension by the former Prime Minister Yousaf Raza Gilani in 2010 on the basis that Pakistan was engulfed in the war on terror due to which there should be continuity in the military leadership.

There were all sorts of rumours going around surrounding General Kayani’s possible further extension as COAS or elevation to an empowered Chairman Joint Chiefs of Staff Committee (CJCSC). However these rumours were dispelled when General Kayani confirmed that he had no plans to continue as army chief or in any other capacity within the army. Following this statement Prime Minister Nawaz Sharif declared that the appointment of the new army chief would be based on merit. He also stated that the appointment of the CJCSC, which has now been vacated with the retirement of General Khalid Shameem Wynne, would be made in tandem with that of the new army chief.

This is a welcome development as it shows that civil-military relations in Pakistan are heading towards normalcy and the traditional predominance of Pakistan’s army in the running of the country seems to be receding. General Kayani has shown his dedication to strengthening democratic principles in Pakistan by voluntarily stating his intention to give way to the next army chief. This is a great step given that army chiefs in the past, especially coup makers, have had the tendency to cling to this all-powerful post.

General Kayani very aptly stated that institutions matter more than individuals and should take precedence. He has done a great service to the country by distancing the army from civilian affairs and in the process allowing civilian institutions to grow in stature and take on the responsibility mandated to them by the public. Unfortunately, it is a common occurrence in Pakistan that individuals in positions of power think of themselves as being indispensable and bigger than the institution they represent.

This has only hurt Pakistan and is contrary to the principles of the stability and growth of these institutions. The dictatorial rule of General Musharraf besmirched the Pakistan army’s reputation to a great extent but General Kayani in his six-year stint as army chief tried to make amends in order to restore the image of the army. It can be said that the politicians have also learnt a lesson or two from the past and are trying to act more responsibly within their domain instead of looking to increase their influence in undemocratic ways.

The previous government of the PPP played a positive role in establishing democracy in its true sense by becoming the first ever democratically elected government to complete its tenure and give way to another elected government. Similarly, Nawaz Sharif is expected to go by the book in determining who the army chief will be this time. In his last stint as prime minister he became adventurous and experimented by handpicking an undeserving candidate (Musharraf) who he thought would be subservient to him, and promoted him to the highest military office that backfired, to say the least, and cost Pakistan dearly as it disrupted the political process.

The army chief’s announcement to retire has been received well in general. It comes as no secret that this post is very important in the scheme of things and the prime minister will have to take the important decision of determining who General Kayani’s successor would be soon.

The three potential candidates based on seniority are Lt-General Haroon Aslam, Lt-General Rashad Mahmood and Lt-General Raheel Sharif. It is to be hoped that the prime minister uses his discretion wisely and chooses the candidate best suited for the job. The appointment of the new CJCSC will also play a part in this equation because if one of these candidates were promoted to this post, then he would no longer be in contention to become the army chief. – Dailytimes