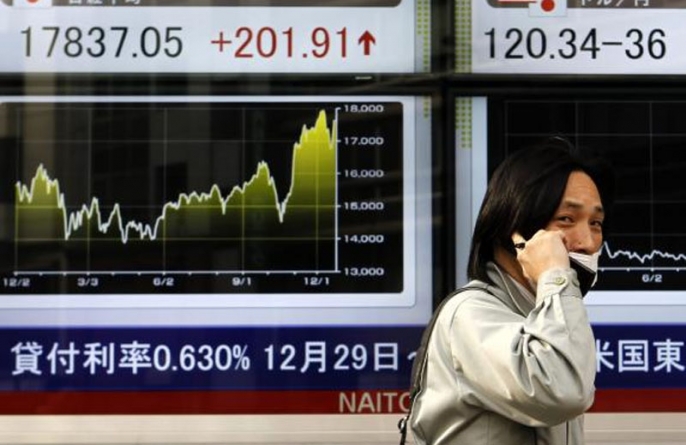 The euro started the new year at 29-month lows in Asia after the head of the head of the European Central Bank fanned expectations it would take bolder steps on stimulus this month, so underlining the U.S. dollar’s rate advantage. In an interview with German financial daily Handelsblatt, Mario Draghi said the central bank stood ready to respond to the risk of deflation. Consumer price data for the euro zone due on Jan. 7 are widely expected to show a fall in annual terms. “We are in technical preparations to adjust the size, speed and compositions of our measures early 2015, should it become necessary,” said Draghi. “There is unanimity within the Governing Council on this.” The ECB council meets on Jan. 22 and markets are wagering it will finally decide to start buying sovereign debt, following in the footstep of the U.S., UK and Japan. That kept the single currency down at $1.2082, depths last seen in mid-2012, while the dollar held firm against a basket of currencies having ended 2014 with its biggest annual increase since 1997.

The euro was now perilously close to its 2012 trough, and major chart support, at $1.2042. A break there would take it to territory not visited since June 2010. Stock markets in Asia were quiet with China, Japan, Thailand and the Philippines all on holiday. Australia’s main index eased 0.2 percent in early trading. MSCI’s broadest index of Asia-Pacific shares outside Japan was flat, having ended 2014 almost exactly where it began – a pattern it has repeated for three years straight. There was little in the way of economic data though China on Thursday reported its official Purchasing Managers’ Index (PMI) slipped to 50.1 in December, the lowest level of 2014, from November’s 50.3. The blow was softened by a rise in the service sector PMI to 54.1, a hopeful sign that services are taking over from manufacturing as a driver of economic growth. In any case, investors are focused on the likelihood that Beijing will roll out more stimulus to avert a sharper slowdown which could trigger job losses and debt defaults.

That was one reason Chinese stocks outpaced the rest of the world to end 2014 with an increase of 52 percent . Wall Street also managed double-digit gains. While the S&P 500 ended Wednesday with a loss of 1.03 percent it was still 11 percent higher for the year. The Dow eased 0.89 percent on Wednesday, while the Nasdaq dipped 0.87 percent. In commodity markets oil prices were trying to bounce after a punishing 2014. U.S. crude futures (CLc1) were up $1.40 at $54.67 a barrel, while Brent was yet to trade (LCOc1). –Reuters