Says growth is not stagnant, Pakistan’s economy will expand by over 5% in FY22 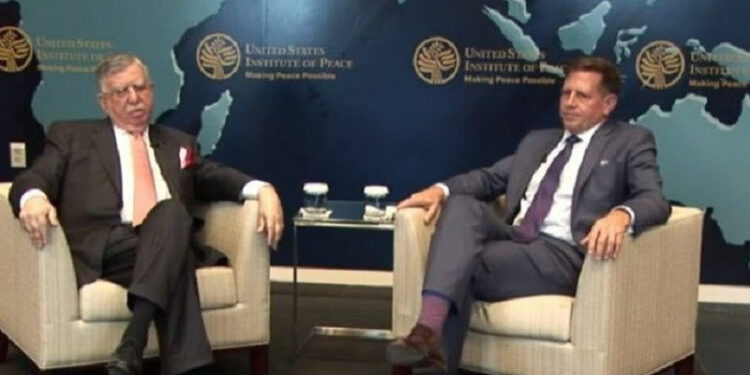 Federal Minister for Finance and Revenue Shaukat Tarin has voiced hope for a successful outcome of negotiations between Pakistan and the International Monetary Fund (IMF) for the resumption of $6 billion Extended Fund Facility (EFF).

“I believe that the progress we have made to date is encouraging and I see the programme getting back on track in this visit,” the federal minister said in an interview at the United States Institute of Peace on Thursday.

The minister highlighted that the conclusion of sixth round of talks with the IMF was the most important part of his visit to the US.

Pakistan’s leadership believed that IMF’s demand to increase power tariff would trigger inflation and the point was raised in technical discussions with the lender, he said.

Tarin added that the global lender was informed that the increase in tariff would be made gradually to avert any abrupt impact on inflation.

He pointed out that some problems were faced while discussing the power sector with the IMF including its excessive capacity.

However, talks were still underway. The minister highlighted that the performance of power generation and distribution companies was also being improved.

The minister emphasised that there was no stagnation in growth and Pakistan’s economy would expand by over 5% during current fiscal year 2021-22. Back in the 1960s, Pakistan’s economy was the fourth largest in Asia, however, the nationalisation policy and the Afghan war of 1979 disrupted economic growth, he lamented.

“In 2018, Prime Minister Imran Khan inherited an economy which was struggling with $20 billion in current account deficit and an unsustainable fiscal deficit,” he said. “This was why the government was forced to resort to a tough IMF programme besides taking unpopular decisions including currency devaluation and increasing the discount rate and utility prices.”

The minister pointed out that just when the country’s economy had started consolidating and growing, the Covid-19 pandemic emerged around the world.

However, the government of Pakistan skillfully dealt with the malady and the country witnessed far lesser human and economic losses from the pandemic than the rest of the world. He said that during Covid19, Pakistan’s leadership kept investing in two productive sectors, i-e agriculture and industry.

Talking about fiscal year 2020-21, he said the growth rate was recorded at over 4% compared to negative 0.5% in the previous year. “Around 60% of the country’s population is below the age of 30 years, therefore, job creation is needed,” he said. “In this regard, the government revitalised agriculture, industrial, export and housing sectors.” At the same time, there was a need to make sure that the economy was not overheated, he stressed.

“The government is making sure that the underprivileged segment of society is not ignored and made to wait for the trickle-down effect of positive economic growth, which had never reached them for many decades,” the finance minister said.

To tackle this, the government adopted bottom-up approaches to ensure sustainable and inclusive growth, he added.

“For the purpose, the government is providing interest-free loans to farmers and low-income families, besides issuing health cards and imparting technical training to help around 4 million households,” he said.

The minister made it clear that Gwadar Port was not China-centric and it was open to all countries including Japan, South Korea and Europe.

He emphasised that if any country wanted to conduct business with African economies and Central Asian states, then Gwadar was the right place.

The minister said that the government had developed infrastructure to attract investment from different countries.

“Gwadar is a huge opportunity and investment is open for all countries,” he said. “Pakistan is making efforts to attract people from different nations for investment in economic zones and the country is also approaching overseas Pakistanis for the purpose.