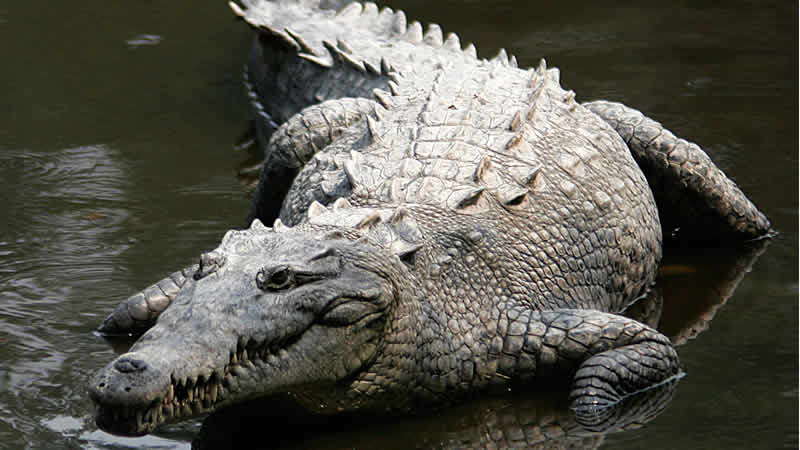 A desperate fisherman threw spanners and spark plugs to fight off circling crocodiles after his friend drowned when one of the animals capsized their small boat, reports said Wednesday.

The holidaymakers were pulling in crab pots Tuesday in Leaders Creek, 38 kilometres northeast of Darwin, when their boat was nudged by a saltwater croc, tipping it over. The men tried to get back on board but it flipped again, trapping one of them underneath, drowning him, the Northern Territory News said. The survivor, 72, told rescuers he tried to pull the boat to shore before getting stuck waist-deep in mud with three or four crocodiles circling him.

He was using spanners and spark plugs to hold them at bay,” said Ian Badham from CareFlight, an Australian aeromedical charity which flew him to a Darwin hospital. He managed to make it into nearby mangroves and spent three hours there before some fellow crabbers heard his cries for help. The man has been left suffering from severe shock and dehydration and exposure,” added Badham, who was speaking to the Australian Broadcasting Corporation.

Crocodiles are common in Australia’s tropical north and they kill an average of two people each year. Crocodile numbers have increased since the introduction of protection laws in 1971, with estimates putting the Northern Territory’s population in the wild at about 100,000. Despite the dangers they pose for swimmers, boaters and fishermen, the Australian government in 2014 rejected the idea of crocodile safari hunts saying there was a danger of “cruel and inhumane” behaviour.

Earlier this year, a 19-year-old on a family camping holiday in the Northern Territory had a lucky escape when he fought off a crocodile which bit into his foot as he slept. In January, a crocodile crunched off a woman’s arm in a “death roll” at a creek in a small town in neighbouring Western Australia state.