Inmates Cook Up A Future At London Jail 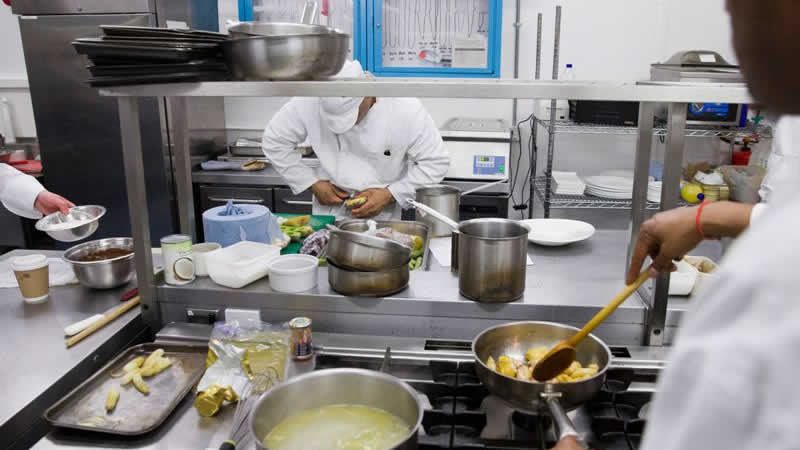 Inmates Cook Up A Future At London Jail

With its leather chairs, glass tables and London prices, The Clink seems like any other restaurant. But the cutlery is plastic, the kitchen knives are kept locked up and the view from the window is of barbed wire.

Located inside Brixton Prison in south London, The Clink lies behind three security gates in a courtyard ringed by high fences, and is staffed by inmates serving lunch each day to up to 120 members of the public.

“Prison is the worst experience of my life. This has saved me, it’s kept me sane,” said Matt, a trainee in the kitchen for the past nine months. Outside, the 45-year-old ran his own construction business. Inside, he prepares dishes such as sesame coated duck breast with bok choy, priced at £14.95 (19 euros, $21). Today, Matt is one of half a dozen white-clad cooks taking part in a masterclass with Gilles Quillot, head chef at the French embassy in London.

“I was a bit nervous at the idea of coming into a prison, as you would imagine,” said Quillot, as he showed one of the trainees how to prepare white asparagus. “But I have to say that the guys have been absolutely fantastic… I’ve already offered a job to one or two!” Quillot was visiting ahead of next week’s “Gout de France” (Good France) event, when The Clink will join restaurants around the world in a celebration of French food promoted by the French government. “To be a good cook, it’s simple  you have to enjoy giving to others,” he told AFP. “So cooking is obviously a good idea for rehabilitation.”

Read More: Muslim Female Pushed in Front of a Train in London

The Clink is one of four such restaurants run by a charity which aims to give inmates the skills and qualifications needed to start a new life when they are released. They claim to have cut reoffending rates from about one in two prisoners nationally, to one in eight graduates. But for many trainees, the scheme is as much about helping them survive their time inside. Built in 1819, Brixton is one of Britain’s oldest prisons with former inmates including Mick Jagger  in 1967 following a drugs bust  and the notorious London gangsters, the Kray twins. These days the jail is focused more on getting its 800-odd low-risk prisoners ready for release, sending some out into the community every day to work.

Prison governor Giles Mason says the restaurant, which opened in 2014, is “a really good part of what we do at Brixton” and insists that no risks are taken when it comes to public safety. The tables are neatly laid with black plastic cutlery, and the knives in the kitchen have to be signed in and out. There is no alcohol, and customers have to leave their phones and laptops outside. “You don’t feel like you’re in a prison when you’re in here,” said Mohammed, a 23-year-old waiter who is working towards a qualification in hospitality. Another waiter, Jamie, is a roofer by trade who has been in and out of 17 prisons in the last decade.

He said his experience serving the public has boosted his confidence. “I’ve given myself a second chance,” he said. Quillot praises the well-equipped kitchen, but rehabilitation efforts at Brixton are hampered by the prison’s age, with inspectors reporting cramped and often grim conditions. “It’s horrible,” said Lancelot, as he expertly rolls risotto balls to make arancini. “That’s why I love it in here. I get away from all the animosity out there.” Before he was sent to jail, the 59-year-old ran his own takeaway business serving traditional West Indian food. Goat curry was his speciality, and he grins at the memory of it. “This is really out of my comfort zone!” he laughs, holding out a ball of rice. “But I’m gettin’ perfect.” He looks over to watch Quillot plate up a starter of pan-fried scallops over a bed of broad beans and chorizo. The trainee cooks jostle each other to try the dish, but Lancelot makes a face. “Not my kinda thing,” he said.