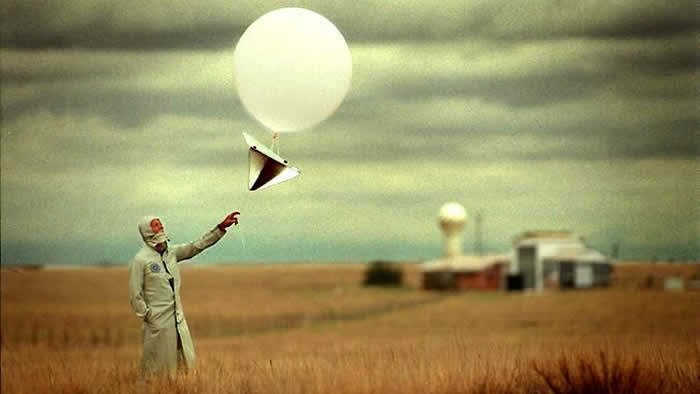 A letter from a man to his mother flown out of Paris by hot air balloon during the Prussian siege in 1870 has turned up in Australia’s National Archives, which said Tuesday it was keen to discover the family’s fate.

The Franco-Prussian War saw the Germans completely surround Paris for more than four months that year. Balloon mail was the only way communications from Paris could reach the rest of France, with dozens of flights made, mostly at night, and hundreds of thousands of letters delivered.

One of them has been discovered by the National Archives. It was penned in French on December 6, 1870 by a man named Charles Mesnier (or Mesmier) to his mother, care of Monsieur Grussin (or Grossin) at 8 Place de la Ville, Pont-Audemer, in Normandy. “It’s a intriguing human element to an important piece of history,” National Archives assistant director-general Louise Doyle told AFP. “We’re not sure how it ended up in Australia, but it would be fascinating to know more. If people see this it would be interesting to have more context in relation to this record.”

The letter was transferred to the archive’s Brisbane office from the former Queensland Post and Telegraph Museum in 2001, but there is no information about its origin. It came to light recently as part of a joint project between the National Archives of Australia and the Archives Nationales in France. In the letter, which is full of fervour, the man assures his mother he is in good health. “We don’t have meat every day and when we do get some it is not very much, but we can easily get by as things are and no one in our household is complaining,” he wrote. Mesnier added: “The desire to repulse the Prussians is right now the solitary concern of Paris. Any suffering can be borne rather than opening the gates of the capital to them.”  He goes on to speak of “some real battles” around the city between November 29 and December 1 in which “our young soldiers have beaten the seasoned Prussian army”. “We have taken their cannon and captured 1,000 prisoners — these days of good fortune have raised the morale of the fearful,” he said. “We cannot succeed in all our attacks but I have the firm conviction, my good mother, that the ultimate success will be for our just cause.” His hopes were dashed, with the city surrendering in late January 1871 after sustained bombardment. Mesnier could not have expected a reply from his family.

While the prevailing winds sent the balloons over the heads of the Prussian army towards French lines, they could not go the other way. The single-sheet letter is just 207mm x 133 mm (eight by five inches), folded into an envelope with the address on the reverse side and Eure, the department where Pont-Audemer is located, written on the top left along with “par ballon monte” — for delivery by hot air balloon. Doyle said it was sent on December 7 and arrived in Pont-Audemer on the 16th. “He’s saying to his family not to worry about him and he’s really at the point of saying the city is pushing back against the Prussians,” said Doyle. “It’s one of those quirky and unusual documents and it would be fascinating to learn more.”  – AFP

Aafia’s family moves IHC to meet her in US

Aafia’s family moves IHC to meet her in US