Thai Man May Go to Prison for Insulting King’s Dog 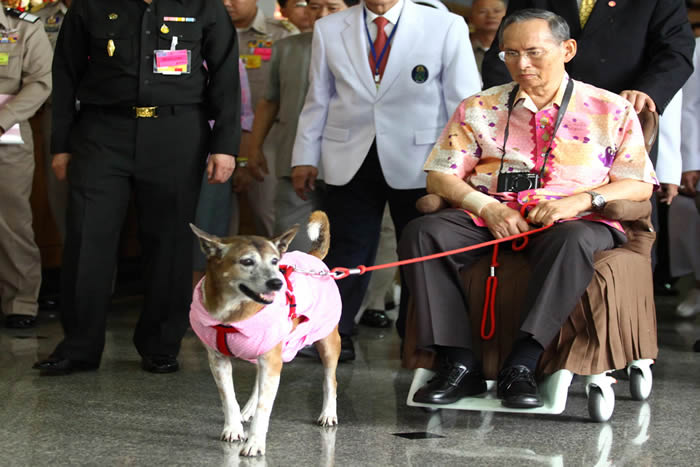 Thai Man May Go to Prison for Insulting King's Dog

A Thai faces prison after being charged with lese majeste for insulting the king s dog, his lawyer said Tuesday, in an escalation of the already draconian royal defamation law. Thanakorn Siripaiboon, 27, has been charged by police with lese majeste for a “satirical” Facebook post about the king and his dog, lawyer Pawinee Chumsri told AFP.

“There was a post including three photos on his Facebook page on December 6 with a message that satirised the king s dog,” she said.

Thanakorn also faces lese majeste, sedition and computer crimes charges for clicking “like” on a doctored photo of the king and sharing it, plus an infographic on a growing corruption scandal engulfing the junta. Thailand has one of the world s harshest royal defamation laws. Anyone convicted of insulting the revered but ailing 88-year-old King Bhumibol Adulyadej, or the queen, heir or regent can face up to 15 years in jail on each count. Prosecutions have soared since the army, which styles itself as the champion of the monarchy, grabbed power in a coup last year. Thanakorn, an auto-parts worker, could face up to 37 years in prison. There has been a recent trend towards record-breaking sentences on transgressors, many of whom are also regime critics.

Even the US ambassador faces a police investigation for royal defamation over a speech last month in which he expressed concern at the lengthy sentences. Bhumibol, the world s longest-serving monarch, is seen as a unifying figure in the deeply divided nation and his economic and social teachings are relentlessly promoted in Thailand. Over the last decade his favourite dog, an adopted stray called Tongdaeng (Copper) which is praised for her loyalty and obedience, has been used to outline his vision of how Thais should behave. An animated film about the dog last week shot to number two at box offices across the kingdom. Most Thais have only known King Bhumibol as their monarch. Anxiety over the future once his six-decade reign ends is seen as an aggravating factor in Thailand s bitter political divide.

EU to Provide 653m to Pakistan for Poverty Alleviation