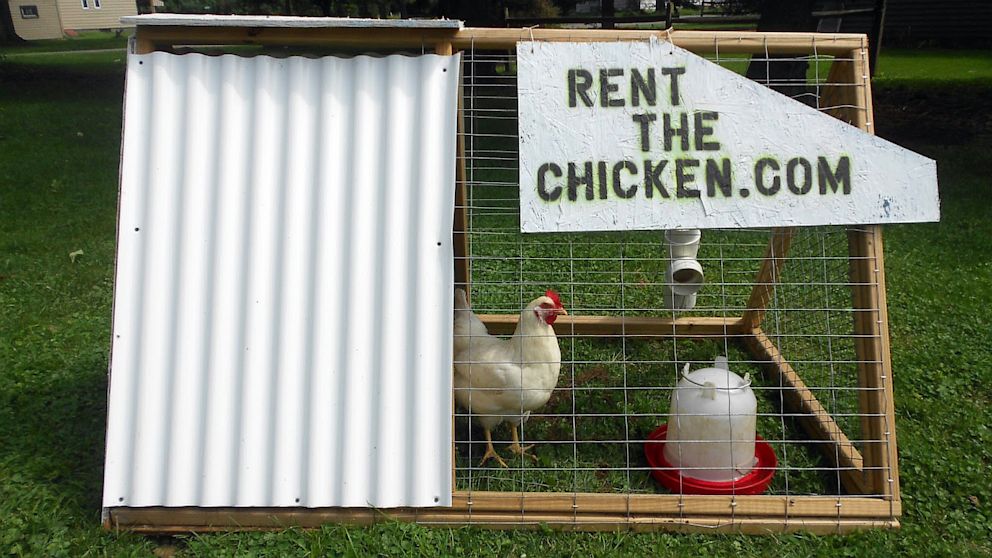 A Pennsylvania couple has come up with a solution to soaring U.S. egg prices: Rental chickens. RentTheChicken.com is the brainchild of Jenn and Phil Tompkins, of Freeport, Pennsylvania, northeast of Pittsburgh.

More than just a cost-beater, they see their business as a way to change how people think about food.

“It changes the mindset of people when they know where food comes from,” said Jenn Tompkins, 38. “Pretty soon they’ll have tomato plants and be turning the chicken manure into compost.” Since starting their home-based business in the summer of 2013, they have rented chickens, either directly or through affiliates, to about 200 customers in 12 U.S. states as well as Ontario and Prince Edward Island in Canada. Interest has been spurred by a surge in U.S. egg prices, which rose a record 85 percent last month after an outbreak of bird flu led to the culling of millions of laying hens nationally, according to U.S. Labor Department data.

For about $400, depending on location, the service provides two laying hens for the four to six warm months of the year, plus a chicken coop and a guidebook. The hens typically produce eight to 14 eggs a week, and at the end of the rental period customers have the option of buying the chickens or returning them. The venture is one of a handful that have sprouted up around the United States in the past few years, capitalizing on renewed interest in local food production. Hope Stambaugh, 37, and her husband Paul, 40, rented four hens this year for $600, which they are raising along with their four young children in Export, Pennsylvania, a Pittsburgh suburb. “I love the idea of knowing where my food comes from,” Hope Stambaugh said. “How special for my kids to see that food does not necessarily come from the store.”

Municipalities vary widely in their attitude toward urban chicken farming. Philadelphia bans it, Tompkins said, while Pittsburgh earlier this month relaxed its licensing requirements to allow homeowners with lots of a minimum size to raise small numbers of chickens, ducks or hornless goats, or to keep bees. Stambaugh said she plans to buy the chickens, named Jessie, Fluffy, Lacey and Princess, at the end of the rental period, and is thinking about moving further out in the country to add a few more. – Reuters