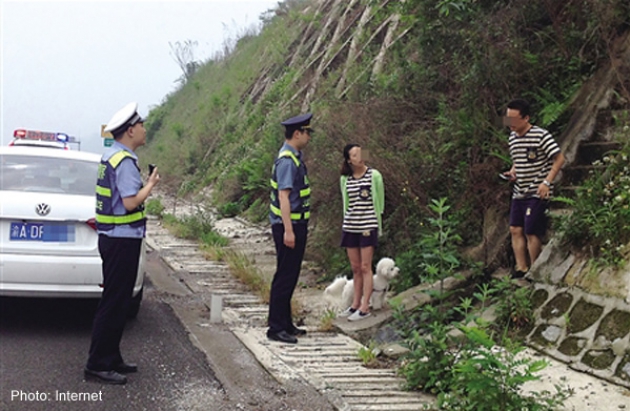 A woman who took her dog for a walk on a motorway in China while her car was parked in the middle of the road was “punished” by police, state media said Sunday.

Her boyfriend was answering “an urgent call of nature” with the couple’s car “in the middle of the highway” in the central Hubei province Friday, Xinhua said, without giving further details.

“The driver did not set up a warning triangle behind the car and passing vehicles had to slow down suddenly and change lanes to avoid the danger,” the news agency said. The “driver” was fined 200 yuan ($32) and handed six penalty points, Xinhua added, without saying if that was the woman or her boyfriend.

But the woman was “punished” for taking her pooch for a walk on the emergency lane of the road, the report added. Friday was the first day of China’s May Day holiday, when traffic is often busy and the government relaxes fees on the country’s toll-roads to boost tourism.rance-Presse