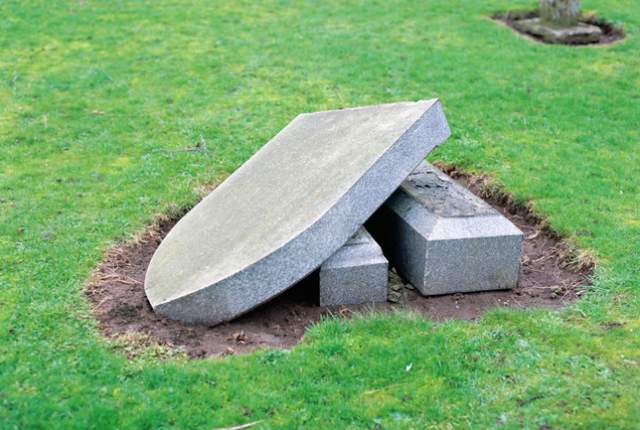 A Pennsylvania man was helping decorate his mother-in-law’s tombstone on Monday ahead of the Easter holiday when it suddenly toppled over, pinning him underneath and killing him, a cemetery caretaker said.

The 400-pound stone fatally injured Stephen Woytack, 74, of Scranton, said Edward Kubilas, caretaker of St. Joseph’sCatholic Cemetery in the eastern Pennsylvania town of Throop, just outside of Scranton. On Monday morning, Woytack was kneeling next to the grave marker while his wife tied on a cross on the other side, Kubilas said. The stoner toppled without warning in the soft spring ground. “His wife came running to get me,” Kubilas told Reuters.

“By the time I got there, he was not too good. I got half the stone off him. It must have been adrenaline.” A police officer and ambulance arrived almost immediately and helped him wrestle the rest of the 4-foot by 4-foot stone off Woy tack, Kubilas said, but it was too late to save him. “It’s a tragic thing,” Kubilas said. “There’s nothing you could do.” Woy tack and his wife visited the cemetery several times each year to decorate the family grave, Kubilas said.