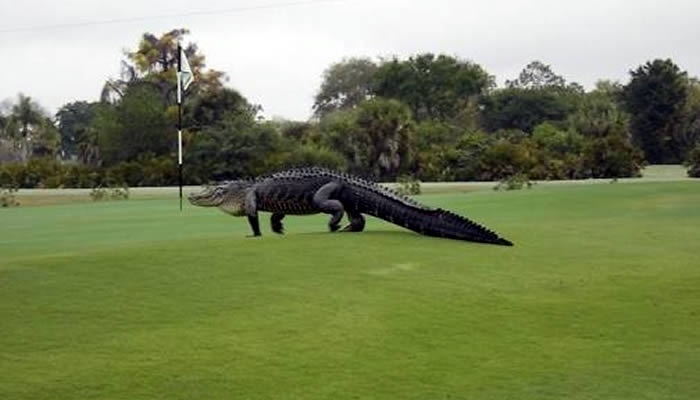 Golfers at a course in Florida on Wednesday were careful to putt around a large alligator, days after the beast was photographed lounging on the edge of the green in an image that went viral on Facebook.

A women s tournament went on as planned at the Myakka Pines Golf Club in Englewood, on Florida s west coast, as the gator, estimated at 12 to 13 feet (3.6 to 4 meters) long, reposed in full view of about 100 participants, said Mickie Zada, the club s general manager. “If we stopped playing because of alligators, we d never have golfers,” Zada said. Zada said she had spent much of Wednesday morning fielding calls from reporters asking whether the photo, taken by a golfer on Friday, was doctored to make the alligator appear larger. “This gentleman is well into his 80s. He wouldn t even know Photoshop,” Zada said.

While more than 200,000 people had viewed the Facebook photo as of Tuesday, according to the club, the alligator is far from the first – or even the biggest – to show up on the course. A 15-footer (4.5-metre long one), nicknamed “Big George,” hung around for years until his death, Zada said. Despite nearly daily alligator sightings at the course, none have attacked a person in the club s 37 years, Zada said, owing in part to a strict policy against feeding the animals. Dangerous confrontations between humans and alligators usually stem from people feeding them, Florida wildlife officials have said. The new alligator has yet to be given a moniker, but that may soon change, Zada said. “We might name him Viral,” she said.