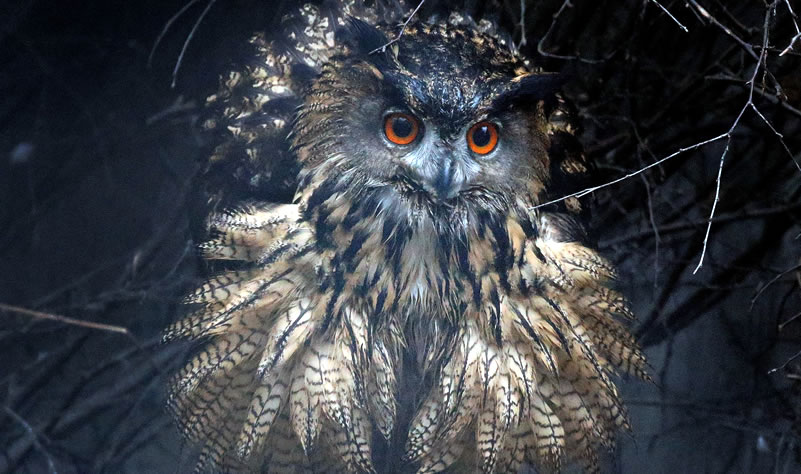 The northern Dutch town of Purmerend has advised residents to arm themselves with an umbrella when going out at night after a mysterious spate of bloody rogue owl attacks.

Over the last three weeks, the European eagle owl has silently swooped on dozens of residents of the usually peaceful town, with many victims requiring hospital treatment.

The latest aerial assault on Tuesday evening saw two members of a local athletics club attacked, with one runner requiring stitches for six head wounds caused by the nocturnal bird of prey’s talons. The club has cancelled all training until further notice. Residents and workers at Prinsenstichting home for the handicapped have been left terrified following at least 15 attacks, spokeswoman Liselotte de Bruijn told AFP. “During the day there’s no problem, but at night we now only venture outside armed with umbrellas, helmets and hats, anything really, to protect ourselves,” said De Bruijn.

“The problem is that you don’t hear the owl before it strikes. Its claws are razor-sharp,” she said. We hope the city will soon catch this rogue bird.” Purmerend city council said it was trying to find a solution. “We want to catch the owl as our city’s residents are in danger,” it said on its website, noting however that the European eagle owl is a protected species that requires special permission to be trapped.

“These procedures can still take some time. Meanwhile, we are advising people to stay away from the owl,” the city said, telling night strollers in the area to shield themselves with umbrellas. Gejo Wassink of the Netherlands’ OWN owl foundation said the bird’s behaviour was unusual. “Either the owl was reared in captivity and released into the wild and now associates humans with food — meaning it’s not really ‘attacking’ people.”

“Or it may have heightened hormone levels as the breeding season starts, which influences its behaviour and makes it defend its territory,” Wassink told AFP, saying the bird “appears to be a female”. He pointed to the wider problem of people hand-rearing owls and then releasing them into the wild when they become too big to handle, potentially leading to an increase in attacks. The European eagle owl is one of the largest owl species, with a wing-span of up to 1.80 metres (almost six feet) and weighing up to three kilos (seven pounds). -AFP

Uzair Not Yet Produced in Dubai Court’