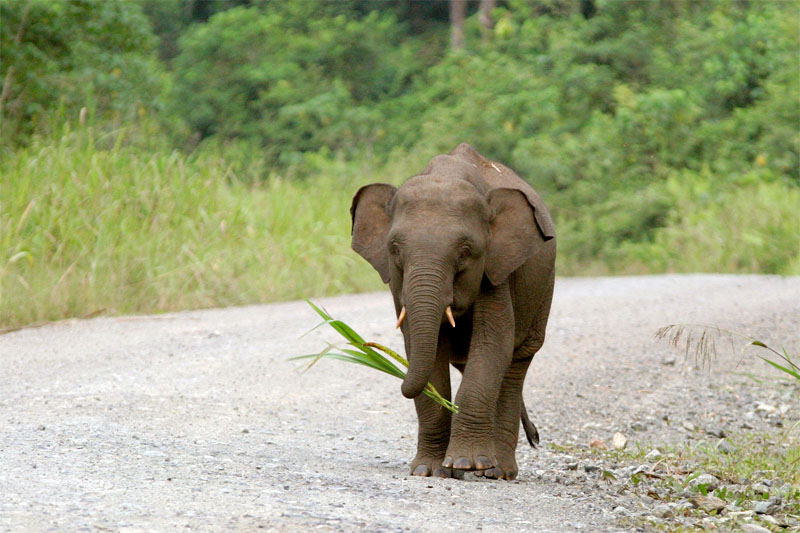 Whether stressed out, frisky or just craving a snack, wild bull elephants have been causing havoc in a Thai national park — shocking visitors by stomping on cars and raiding restaurants.

In the latest incident early on Monday a 30-year-old elephant named “Duan” — “amputated” in Thai, on account of his damaged tail — destroyed a small restaurant because he was apparently unable to resist the aroma of cooking food. “He wanted to get salt, sugar and other seasoning. He likes them,” Kanchit Srinoppawan, head of Khao Yai National Park in central Thailand, told AFP on Tuesday. The giant pachyderm needs the minerals along with the 200 kilogram (440 lbs) daily food intake, he added.

In the most startling incident another male elephant stomped on the bonnet of an occupied car with his front two legs, before momentarily sitting on the vehicle. The car was among dozens visiting the park on Saturday, Thailand’s Children’s Day. “The drivers stopped when they saw the elephant and the elephant could not cross the road so he felt stressed and stomped the car,” Kanchit explained. “It pushed the car with its tusks and the bonnet fell off,” Kanchit said, adding the young male elephant then headed back into the forest. It was the second time since January 1 that the same bull had attacked a vehicle.

Authorities in the vast park, which is home to at least 300 wild elephants, have urged visitors to take care if they see an elephant — more so since it is mating season and the bulls can become aggressive. “When you see an elephant do not honk, do not flash your car lights, do not take photos and keep your engine running,” Kanchit said. But ultimately the protected park belongs to the wildlife, Kanchit said, adding “we must balance between people, wild animals and tourism”. -AFP