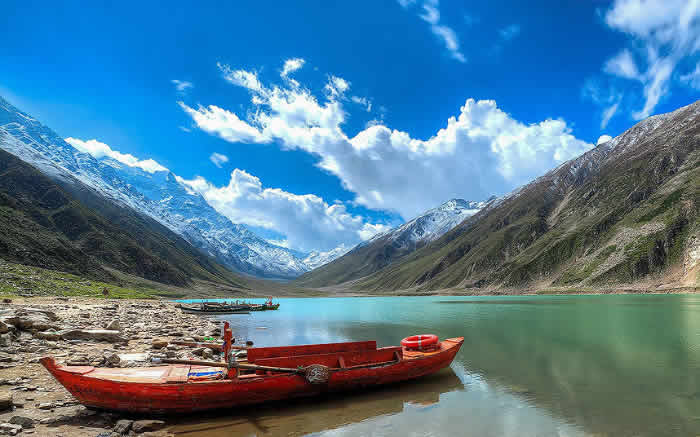 10 beautiful photos you won’t believe were taken in Pakistan.Long considered a no-go for Western tourists, perceived by too many as a lawless desert land, Pakistan is  would you believe it – rather beautiful. From its wild coast in the south, to the meeting point of three colossal mountain ranges in the north, via lush valleys and fertile fields, its landscapes might make you consider it again.

1. The itinerary crosses the Baltoro Glacier, one of many in this frozen landscape. Those glaciers melt at lower altitudes to form the rivers that rush through northern Pakistan. The Indus river flows from the Mani glacier in the Central Karakoram National Park, meeting with the Gilgit river at Jaglot, and winding its way alongside the Karakoram highway, the N35, which is one of the world’s highest paved roads, and connects Pakistan with China. 2. KE Adventure Travel offers several trekking itineraries in the frozen landscapes of northern Pakistan. Its K2 and Corcordia Trek reaches the “Throne Room of the Mountain Gods” beneath (but not attempting to summit) some of the world’s most fearsome peaks. The week-long trail affords stupendous views of the Trango Towers (pictured). 3. Pakistan offers mountaineers some of the world’s most exciting trekking opportunities. This image shows Broad Peak base camp (4,960 m) at night, with K2 (8,611m) and the Godwin-Austen glacier in the background in the Central Karakoram National Park in the country’s north. 4. Women and girls dress in brightly coloured and beaded attire for the festivals. Gender roles in the Kalash, whose estimated population is 3,500, are distinct, and many marriages are arranged. 5. The Foreign Office still regards the Kalash Valley as off-limits, but it is home to an eponymous people, most of whom practise their own Kalash religion. They featured in the 2004 series, Himalaya with Michael Palin. They hold frequent festivals, which include singing, dancing, chanting and the offering of seasonal produce to their ancestors. These photos were taken by Neil Harris on Wild Frontiers’ 16-day Hindu Kush Festival Adventure itinerary, on which travellers spend two days with the Kalash and visit their spring festival. 6. This image shows Sharda, in the Neelam Valley, in Pakistani Kashmir. 7. This image by Mazhar Nazir shows Lake Saif-ul-Malook, in the eponymous national park near the Indian border. The valley in wihch it lies was formed nearly 300,000 years ago, while in folk lore, it is believed that a prince of Persia fell in love with a fairy princess here. 8. His photos of Islamabad include this shot of the modernist Faisal Mosque surrounded by trees. Many tourist itineraries to northern Pakistan start in this city, before flying north into the mountains. 9. Also on Pakistan’s coast, in the south of the country, there are pretty spectacular sunsets from the beaches near the city of Karachi. Ahmad Haq is a doctor and amateur photographer, who travels widely in Pakistan shooting images. He said. I really want people to start changing the perception of Pakistan they have in mind, because Pakistan is a beautiful country but sadly this side of it never gets a place in the news.” For more of his images. 10. Broghil Valley, near the Afghan-Pakistani border, spans green valleys, mountain spires, peat bogs and white glaciers. Photographer Ghulam Rasool captures its Karambar Lake under a full moon. “My Eyes are Witness”, an exhibition of Mr Rasool’s photos, will be on at Asia House in London until August 28, free admission: