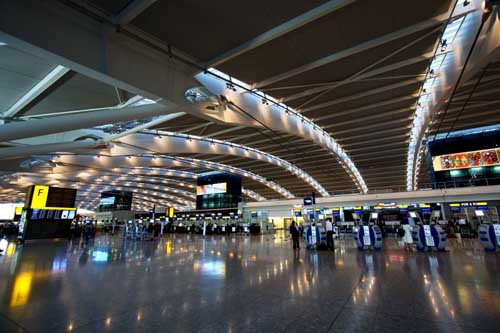 Skytrax has released the results of its annual World Airport Awards and, once again, Singapore’s Changi Airport has taken the top spot. It’s no surprise that Changi came out on top again. The international transit hub has incredible amenities, such as a butterfly garden, rooftop pool, movie theaters, hotels, spas, and showers — and even a four-story slide.

Skytrax based its rankings on 12.85 million customer nominations across 110 nationalities and included 410 airports worldwide. It incorporated passenger satisfaction across nearly 40 categories, including service and shopping and security and immigration.

All the airports commended last year made the 2014 list, but in a slightly different order.

Why it’s awesome: Despite London Mayor Boris Johnson’s concern that Heathrow gives visitors “a terrible impression of the U.K.,” the overcrowded airport made it into Skytrax’s top 10. The third-busiest airport in the world in 2011, it took home the awards for Best Airport Shopping and Best Airport Terminal, for T5, which opened in 2008 after a $6.2 billion, 19-year design and construction process. Heathrow’s Skytrax review includes four or five out of five-star rankings for ease of use, flight information, public transport, security staff efficiency, and more.

Why it’s awesome: The least busy airport in Skytrax’s top 10, Vancouver International offers visitors a large collection of Pacific Northwest native art. Skytrax named Vancouver International the Best Airport in North America for the fourth year in a row in 2013, a streak that justifies the $1.4 billion that the airport spent on a recent expansion. It also ranked top for staff. Volunteers, known as green coat ambassadors, help travelers get to where they’re going.

Why it’s awesome: The largest international airport in Switzerland, Zurich Airport was significantly expanded in 2003 with a new terminal and an underground automated train called the Skymetro, which shuttles travelers. Located seven miles north of Zurich’s city center, this airport also ranked highly in Skytrax’s airport security processing, immigration, and dining categories. The airport offers a porter service for which travelers pay a fee to have their bag picked up from anywhere in the airport and delivered to their final destination.

Why it’s awesome: Already beyond its 78-million-passenger annual capacity, Beijing Capital is the busiest airport in Asia and the second busiest in the world, trailing only Atlanta’s Hartsfield-Jackson. That’s why the city is building another airport, one that will be bigger than New York’s JFK,

LaGuardia, and Newark airports combined. Capital’s tallest building, Terminal 3, came in eighth for Best Airport Terminal. It opened in 2008, in time for the Beijing Olympics. Its Langham Place Beijing hotel was named the second-best airport hotel in the world.

Why it’s awesome: With a third international terminal opened in 2010, Haneda can accommodate 90 million passengers annually. More construction is in the works. The Ministry of Land, Infrastructure and Transport announced plans to expand the new terminal with eight more gates, more parking, and a hotel by March 2014. The airport won Skytrax’s award for World’s Best Domestic Airport, and was commended for shopping, security processing, and cleanliness.

Why it’s awesome: Schiphol opened in 1916 as a military airfield and has transformed into one of the busiest airports in the world. While travelers wait for departure, they can enjoy a massage, play a game of poker at the casino, and catch up on some reading in the airport library. According to Skytrax, Schiphol also has excellent dining, shopping, and leisure options.

Why it’s awesome: Located less than five flying hours from half of the world’s population, Hong Kong’s airport is one of the busiest. It was named the best airport for dining and baggage delivery, and ranked among the top airports for cleanliness and shopping.

In March 2012, the airport added a third runway to increase its capacity. Hong Kong International offers a nine-hole golf course — a great place for travelers to spend long layovers.

Why it’s awesome: Germany’s second-busiest airport features aesthetically pleasing terminals on the walk to the gates. Many of the walls and ceilings are made of glass, making the airport feel large and open. The airport, a 45-minute train ride from Munich’s city center, was named the best in Europe and commended for its dining and shopping options.

Why it’s awesome: Incheon, the largest airport in South Korea, serves passengers on more than 70 airlines, and is one of three airports to receive a five-star overall rating from Skytrax. Every year from 2005 to 2012 it was rated the world’s top airport by Airports Council International. The young airport — it opened in March 2001 — is home to a museum of Korean culture, and has excellent rankings for cleanliness, external views, rest areas, Internet access, and local-food choices.

Why it’s awesome: Changi is designed to alleviate the stress of travel, and it offers passengers the opportunity to enjoy lots of greenery, an outdoor pool, and a butterfly garden. For those who prefer to stay inside, it houses movie theaters, spas, showers, and a four-story slide. Business Insider editor Jennifer Polland visited last month and wrote: “I recently spent several hours in the airport during a trip to Singapore.

The bottom line: This is a place where you’ll actually enjoy having a long layover.” This year, it won high marks for security, immigration processing, leisure options, and cleanliness.