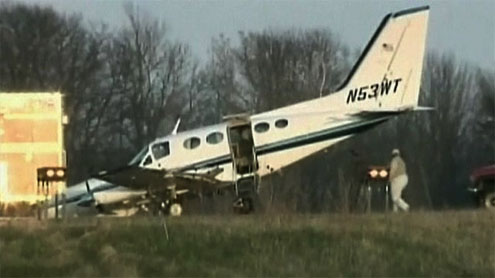 An 80-year-old US woman with little flying experience has staged an emergency landing in Wisconsin after her pilot husband collapsed and died.

Helen Collins remained calm as she brought the small Cessna plane in to land at Cherryland Airport, even though she said she knew her husband was dead.She had taken basic lessons in taking off and landing 30 years ago, her son told the Associated Press news agency.James Collins, also a trained pilot, helped guide his mother down via radio.Mrs Collins and her husband John were coming back from their holiday home in Florida when he suffered a fatal heart attack in the cockpit.

She called the police and local pilot Robert Vuksanovic went up in another small plane to try to help guide the Cessna down.The plane had almost completely run out of fuel by the time she landed at the small airport in Sturgeon Bay and had only one functioning engine.It skidded down the runway for about 1,000ft (305m) before coming to a halt.”She was calmer than everybody on the ground. She had it totally under control,” James Collins told AP.

“The amazing thing is she landed that plane on one engine – I don’t know if there are a lot of trained pilots that could do that.”I already knew I lost my dad; I didn’t want to lose my mom. It could have been both of them at once.”Local resident Torry Lautenbach watched the Cessna land and estimated that Mrs Collins circled the airport about 10 times.”She did a really good job. It was amazing. It took one bad hop and then it came back down and skidded.”Mrs Collins was taken to hospital with injuries to her back and ribs but is expected to be released within the next few days.