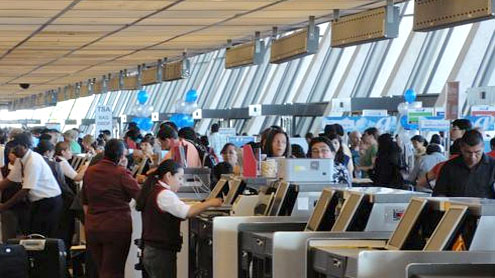 CHICAGO: Undeterred by costlier gas and airfare, millions of Americans set out Wednesday to see friends and family in what is expected to be the nation’s busiest Thanksgiving weekend since the financial meltdown more than three years ago.

Many people economized rather than stay home.”We wouldn’t think of missing it,” said Bill Curtis, a retiree from Los Angeles who was with his wife at Bob Hope Airport in Burbank, Calif. “Family is important and we love the holiday. So we cut corners other places so we can afford to travel.”About 42.5 million people are expected to hit the road or take to the skies for Thanksgiving this year, according to travel tracker AAA. That’s the highest number since the start of the recession at the end of 2007.

Heavy rain slowed down early travelers along the East Coast. Snow across parts of New England and upstate New York made for treacherous driving and thousands of power outages. And a mudslide covered train tracks in the Pacific Northwest. But most of the country is expected to have clear weather Thursday.As afternoon traffic picked up, flight delays were reported in Boston, San Francisco, Newark, N.J., and New York.The average round-trip airfare for the top 40 U.S. routes is $212, up 20 percent from last year. Tickets on most Amtrak one-way routes have climbed slightly, and drivers are paying an average $3.33 a gallon, or 16 percent more than last year, according to AAA.

Jake Pagel, a waiter from Denver, was flying to see his girlfriend’s family in San Jose, Calif. He said he had to give up working during one of the restaurant industry’s busiest and most profitable times.”I think it’s something you can’t quantify in terms of monetary cost,” he said. “I mean, being able to spend quality time with your family is fairly significant.”Most travelers — about 90 percent, according to AAA — are expected to hit the road.John Mahoney acknowledged the economy has changed the way he travels, which is why he and his girlfriend slept in their car instead of getting a motel room when a heavy, wet snowstorm flared up along the New York State Thruway during their 20-hour drive from New Hampshire to St. Louis.

“Americans will still do what Americans do. We travel the roads,” he said.Some drivers who tried to get an early start along the Pennsylvania Turnpike found themselves stopped by — or stuck in — a gooey, tar-like mess after a tanker truck leaked driveway sealant along nearly 40 miles of highway. At least 150 vehicles were disabled Tuesday night.Shun Tucker of suburban Chicago decided to spend the holiday with family in Memphis, Tenn., and booked a $49 bus ticket for a nine-hour trip south. “Yeah, I could go to the airport, but it’s going to cost me $300,” she said.Lucretia Verner and her cousin set out on a drive from Tulsa, Okla., to Atlanta.

They said they wouldn’t stop to eat on the way, making do with the water, juice, lunch meat and bread they took with them. Colette Parr of Las Vegas took flights with connections and switched airlines to save almost $200 on her trip to Newark, N.J.Investment manager Matt Rightmire and his family typically fly on Thanksgiving. This year, they are making the holiday pilgrimage by car from New Hampshire to his in-laws in Youngstown, Ohio. He figured he is saving $1,000.”It’s family,” he said. “That’s what the holidays are about: Spending time with family. I don’t really think it’s optional. You may try to find the least expensive way to get there, but you’ve got to see your family.” – Yahoonews