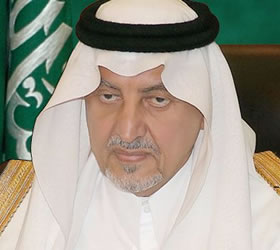 Gov. Prince Khaled Al-Faisal announced Wednesday the government’s plan to establish an airport in Qunfuda, a town on the Red Sea, south of Jeddah, as well as a seaport and an industrial city in Al-Leeth, another town on the Red Sea.

He made this comment after launching a number of tourism projects in Qunfuda and Al-Leeth, in the presence of Prince Mansour bin Miteb, minister of municipal and rural affairs and Prince Sultan bin Salman, chairman of the Saudi Commission for Tourism and Antiquities (SCTA).

“We have completed construction of most infrastructure projects in both Qunfuda and Al-Leeth,” the governor said. Prince Sultan said the new tourism projects launched by Prince Khaled would create about 50,000 new jobs for Saudis.

“The state and the national economy are badly in need of investment projects that create more job opportunities for citizens,” Prince Sultan said. “The tourism sector will provide jobs to Saudis in the areas they live,” he pointed out.

The SCTA chief emphasized the need to develop tourist facilities in various parts of the country. “We are not targeting development of a particular region. We look at all cities and provinces with the single perception.”

He disclosed plans to develop the central region of the resort city of Taif, adding that the project would cost SR120 million.

He also referred to the Okaz Souk project and other tourism projects on Taif mountains. “Contracts will be awarded for implementing these projects shortly,” Prince Sultan said.

He called for the establishment of a fund for tourism development to support tourism projects. “Without such a fund the situation of national tourism would not improve and prices would not change. The fund will also help boost tourism investment,” he said.

Prince Sultan stressed the need for expanding tourist facilities in order to attract tourists from within the Kingdom and abroad.

“The shortness of leasing period for lands given for investment is one of the major obstacles facing tourism investment,” Prince Sultan said and hoped the problem would be solved in the new fiscal year.

Jeddah Mayor Hani Aburas said the mayoralty would implement a number of tourism projects in Qunfuda and Al-Leeth in cooperation with SCTA. “We have identified places in both towns for these projects.”